Does The US Military Have Too Many Generals?

On May 12, the Senate Armed Services Committee proposed some pretty substantial cuts to the military’s general and flag officer... 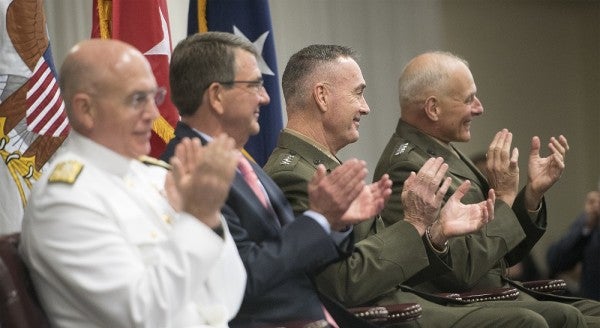 On May 12, the Senate Armed Services Committee proposed some pretty substantial cuts to the military’s general and flag officer corps. As part of the National Defense Authorization Act for fiscal year 2017, the provision proposes cutting the number of generals by 25%, or 222 of the Department of Defense’s 886 generals and admirals.

According to the committee, the number of general and flag officers has “become increasingly out of balance with the size of the force it leads.”

The Daily Beast reports that there are 12 generals commanding the fight against the Islamic State in Iraq. That’s one flag officer per 400 troops. That’s about the size of two infantry companies, which are typically led captains, not someone four or more pay grades above.

“Over the past 30 years, the end-strength of the joint force has decreased 38 percent, but the ratio of four-star officers to the overall force has increased by 65 percent,” wrote the committee. “Especially at a time of constrained defense budgets, the military services must right-size their officer corps and shift as many personnel as possible from staff functions to operational and other vital roles.”

According to Time, part of the problem is that there are many generals who are now doing jobs like legal, medical or public affairs, that used to be done by a colonel. In addition to cutting down the overall number of admiral and general officers, the committee is taking aim at its four-star ranks in particular.

The Senate Armed Services Committee, led by Sen. John McCain, wants to cut their ranks by 34%, from 41 to 27. Those who remain would include the Joint Chiefs of Staff, including the head of the National Guard Bureau; the combatant commanders; the commander of U.S. forces in Korea; one additional joint billet nominated by the president, like the four-star command currently in Afghanistan; as well as three additional four-star billets each for the Army, Navy, and Air Force to be filled as the services choose.

It almost goes without saying, but the higher the rank, the more money you make. As reported by Time, in the case of a four-star general, the basic annual pay comes out to $181,500, so eliminating some of these positions frees up that much in more in DoD dollars, not to mention the fact that general officers are often flanked by numerous aides, and those with three or four stars may even count other one or two-star generals and admirals among their entourage.

There’s also the issue of redundancy, with four-star generals and admirals falling under the purview of other four stars.

The Army recently had a three-star position in the Pacific elevated to a four-star billet, simply so it could be on par with the Air Force and Navy commands in the area, all of whom report to another four star, Navy Adm. Harry B. Harris Jr., with U.S. Pacific Command. Additionally, the four-star general in Afghanistan, Gen. John W. Nicholson Jr., reports to U.S. Central Command, which, you guessed it, is also headed by a four-star general.