Statistically, the Navy does not have an officer retention problem. Yet everyone knows in reality, many of the best people... 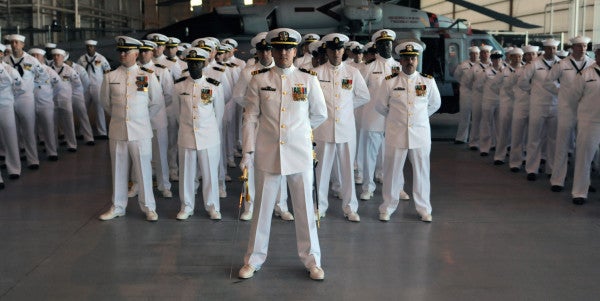 Statistically, the Navy does not have an officer retention problem. Yet everyone knows in reality, many of the best people are leaving. Despite the high volumes of officers who voluntarily resign their commissions as lieutenants, competition is still tight to make lieutenant commander. Aviation and surface warfare easily makes all the department heads that it needs to — although many would argue that this is in part because the Navy brings in even more people than it needs to. Some units have new officers who are given fake jobs at their first assignment because rather than try to retain the people it already has, the Navy just made more ensigns. Even Chief of Naval Personnel Vice Admiral Bill Moran expressed awareness and concern in 2015 that the Navy is losing people it should retain, despite maintaining the numbers it needs to.

The Navy does not track if its best people are leaving, but it should so we can capture this metric to improve retention efforts.

Are the people getting promoted truly the best, or the best of who’s left? In reality, both. There are some tremendous, inspiring leaders in the senior ranks; I can name at least one leader, ranging in rank from E-7 to O-7, at every command I’ve been assigned to whom I admire. But for all the great leaders I tried to emulate, there were as many who toed the party line, suppressed innovation, demeaned subordinates, ignored major problems because fixing them would be too much trouble, and were more focused on personal recognition than taking care of their people and serving the United States. Often those bad leaders found ways to drown out or disempower the good ones.

Of nearly two dozen ensigns and lieutenant junior grades who were in my first wardroom when I checked on board, I can count on one hand how many are still in the Navy. Many of those remaining on active duty transferred to other communities within the Navy, including to the one that I was already in. While cultures certainly differ by designator, and some are certainly more friendly than others, many issues cited by junior officers who separate are nearly universal.

I chatted with one of the top officers from that initial wardroom as he was about to start his terminal leave. He noted that if a Fortune 500 company viewed employee retention and top talent in the same way as the military, it would go out of business. Therefore, a concerted effort is made to get people to stay. Training new people is expensive.

While the military understands the concept of optimal staff turnover and needs some people to get out along the way — there are only so many billets for E-7s and O-4s and up — there’s no sense of urgency at the most senior level to retain the best people. Because we’re all expendable, and there will always be more, there’s little incentive to actually monitor if good officers are leaving.

This is irresponsible, especially for an organization that teaches accountability at every level. Few of us who choose to separate do so without reservation, cursing the Navy’s name. A point that seems to escape many decision makers is that many of the best officers who leave love the Navy. We’re proud to wear our uniform, represent our country, and engage in the business of the relentless pursuit of our nation’s enemies. I didn’t want to go, but knew I had to if I wanted to meet my educational and career goals, and not destroy my relationships with the people I love. I saw relatively easy fixes for two of those issues; the third might have followed suit had the other two been possible.

In 1998, an article in the U.S. Naval Institute’s Proceedings magazine, called “Listen to the J.O.’s: Why Retention is a Problem,” cited loss of job satisfaction, self-inflicted pain, micromanagement, lack of confidence in senior leaders as major reasons why officers choose to leave. Keep in mind that there are commanding officers today who were still midshipmen in 1998, then compare to some of the reasons I cited for resigning: highly scripted career path, zero-defect mentality, and micromanagement. I had not previously read the Proceedings article. These are all fixable issues, yet little has changed.

Part of the problem is some senior leadership, especially at the general/flag officer level, who may think, “It worked for me, it should work for them,” denying that many of them were promoted to the senior ranks not because they were the best throughout their entire career, but because they were the best of who was left after most of their peers got out at the fight-to-eight year mark. These are the guys who stayed in after 1998.

Thankfully, some senior officers are listening, including, the chief of naval personnel. Others are even writing about their concerns, including one captain in the surface warfare community who wrote in a recent article of Proceedings about both current and proposed initiatives to retain top talent such as increasing access to civilian-graduate education, exposure to top private companies, expanding opportunities for sabbaticals, and treating dual-military co-location as a rule and not a good deal.

Another major change, doing away with promotion zones, may allow some to promote sooner without having to “wait their turn” for as long. More changes need to be made, and it is necessary to understand the quality of officers who leave, as well as their reasons for leaving, to change practices to keep the best people in.

The fact that the Navy’s periodic evaluation system for officers — the fitness report — needs to be overhauled is implied. Every cycle, a senior rater is faced with ranking people based on their time at the command, who will be next up for promotion (and possibly higher tenure separation), who will be voluntarily separating, and actual performance. Many top business schools routinely publish reports about creating quantifiable means of identifying top talent. How can we draw from information that already exists in someone’s record — FITREPS, qualifications, awards, etc. — to draw a picture of who our best people are?

Google, known for both recruiting and retaining top talent, uses a system called Objectives and Key Results. This system works by assigning a point value to achievements and characteristics, and then averaging that to a total score. In a broad sense, the Navy FITREP system already uses this method by assigning personnel a trait average on a 1-to-5 scale, and then establishing someone as above or below a commanding officer’s average based on how others were rated.

But it’s also important to note that some commands also may have a stronger pool of officers than others. For example, a command that specifically screens and selects its people will essentially have the “best of the best” and possess an entire cadre of officers who would stand head and shoulders above their peers at any other command, but might not break out as well in a group of exceptional peers. Therefore, a system that would help track the quality of officers who resign from the military would also provide an avenue for comparing officers across commands.

An officer’s service record — the same one that is briefed at a promotion board — includes quantifiable information such as highest level of education, source of a degree (ex: did the individual go to a top school that’s not usually a feeder for the military?), languages spoken (extra points could be assigned for critical languages), ranking, trait average, number of additional qualifying designators (with weight given to more critical AQDs), history of assignments (including special duty), awards, and number of deployments.

While applying Objectives and Key Results to this information would not be infallible — it wouldn’t capture the highly valuable but less tangible quality of leadership skills — it would help paint a better picture of who’s leaving. For example, did we just let an Arabic-speaking “Early Promote” with a masters’ degree, four deployments, and special duty assignments walk out the door?

In addition, why don’t we track the separation of officers who are in relatively common but poorly addressed situations such as dual military relationships (including those who are not yet married), those who have civilian spouses with their own careers, those who are single and may be frustrated with the fact that never being home makes finding a partner difficult, and officers who leave from commands with negative command climate surveys. And what do those officers do when they get out of the Navy?

A deeper understanding of all of these metrics could enable the Navy to make better decisions about shaping who remains in the force and develop new tools to retain the best. The Navy is already a better force than when I joined seven years ago: Don’t Ask Don’t Tell was repealed, women became submariners, cultural support technicians, and now Rangers and soon SEALs. We have a sabbatical program, 12 weeks of maternity leave, and expanded graduate education opportunities.

However, there’s still a lot of work to do, and leadership only needs to understand the extent of the problem in order to keep pursuing effective solutions.