How Should Military Leadership Respond To Calls For Compensation Reform?

The Military Compensation and Retirement Modernization Commission released its long-awaited final report on Thursday, offering a number of findings and... 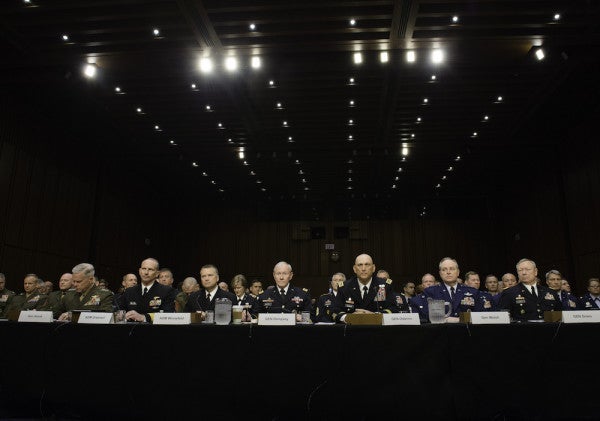 The Military Compensation and Retirement Modernization Commission released its long-awaited final report on Thursday, offering a number of findings and recommendations for improving “the fiscal sustainability of the compensation and retirement systems.” These recommendations include moving from a defined benefit to a blended defined benefit and defined contribution retirement system, changing the health care system for family members and retirees, and an affirmation of existing quality of life programs. Fundamentally untouched are current military pay tables and allowances for housing and subsistence.

The existence of the report itself is significant, as it forces a difficult conversation between Department of Defense leadership, Congress, service members, and society at large. Issues of military compensation and retirement reform have been avoided as a third-rail conversation in post-9/11 America, rightly driven by the fact that we were in the midst of sending our service members into combat, many of them for multiple tours. The review of the existing system was necessary in order to address rising personnel costs, particularly in an era of decreasing defense budgets. The report is powerful in that it requires factions on both civilian and military communities to honestly evaluate the social contract Americans have with their military, and what it will take to sustain the all-volunteer force in a time of protracted war.

Despite both the increased value to all service members, and the modest reduction in cost to the government, the concept of a “401k-style” retirement for service members faces a number of critics, who see the portability of benefits as a risk to retention during the mid-career years, precisely at the moment when the services most need highly skilled professional officers and noncommissioned officers. The existing retirement structure sets service members up to perceive a “sunk cost” associated foregoing retirement around year 10; the promise of a full retirement at year 20 (when most service members are between ages 38 and 42) becomes more difficult to leave on the table once they achieve the halfway point. The commission’s recommendations attempt to address these concerns by factoring in continuation pay, a bonus at 12 years of service equal to 2.5 times the service member’s monthly base pay to incentivize retention. However, a sole focus on reform via compensation may not be enough to solve retention problems, as the rising generation of millennials in the military are incentivized by more intangible motivators such as work-life balance, career satisfaction, and the opportunity to serve a cause greater than themselves.

Indeed, finding ways to retain the military’s top talent is the most pressing issue at stake. But perhaps the fear induced by the introduction of a 401k-style retirement is a symptom of a much larger issue: How do we best manage our people when they can choose to leave? What incentives lead individuals to stay in or get out of the military? What incentives do they respond to? And, fundamentally, how does the military manage its talent?

The fierce competition to retain top talent is nothing new in the corporate sector. The 401k revolution of the 1980s forced corporate human resources departments to take stock of how best to incentivize retention of their most highly desired employees as the “golden handcuffs” of defined benefit pension plans evaporated. Essentially, they were faced with the same question: How do we get high-performing employees who choose to stay?

The industry was forced to innovate. Over the years, a number of non-monetary and low-cost solutions were implemented to motivate employee retention, including flexible work hours, recognition programs, professional development opportunities, and workplace environment considerations. Companies were forced to take stock of the skillsets and strengths of their employees. Good companies used this information to optimize the job placement of individuals, finding the sweet spot where personal fulfillment and organizational need aligned.

Admittedly, the military is decidedly not a corporation. But there are areas where the military could stand to learn from its private-sector counterparts, particularly those that emphasize promotion from within, such as General Electric, and more closely replicate the closed system of promotions in the military.

If the services, DoD, and Congress agree to implement the blended retirement system posed by the commission, the military will be forced to approach talent management in new and innovative ways. Additionally, the services will have to gain a better understanding of, and reckon with, the real reasons people choose to leave, such as the inability to plan ahead for frequent moves or the feeling that they are simply a cog in the machine. The good news is that increasing job satisfaction doesn’t have to cost money. The bad news is that it’s going to require a lot of hard work.

To start, the military needs to improve the way it collects data on and from its people. Officer evaluation reports and their enlisted equivalents are a good place to start, but it may be worth rethinking how the information obtained can better enable the services to match supply and demand. Exit interviews — a longstanding tradition in the corporate sector — should be conducted to find out who is leaving (are they the high/average/low performers?), why they are leaving (family pressure? New career? Desire for stability?), and where they are going (graduate school? High-paying job? Back to their hometown?) This information can be used to recalibrate energy and resources toward meaningful retention strategies.

The services can optimize the supply-side economics of the labor pool by increasing service members’ agency, particularly with respect to job placement and stability. While service members don’t have agency over when and how often they deploy, they could have more agency over location and unit assignments through such market-driven resources as the Army Green Pages.

Fortunately for the military, while compensation has always been a factor in recruitment and retention, it isn’t the factor. Time and again, surveys of military service members and veterans reveal that the primary motivation for joining is “service to their country.” The military has an opportunity to take the commission’s retirement recommendations and use them to spur true talent management, creating a system where the best and brightest choose to stay, even if they could take their money and walk.