The One Lesson On Leadership That The Military Needs To Embrace

In 2012, Pulitzer Prize-winning journalist Tom Ricks, wrote an article called “General Failure,” followed by a book on the same... 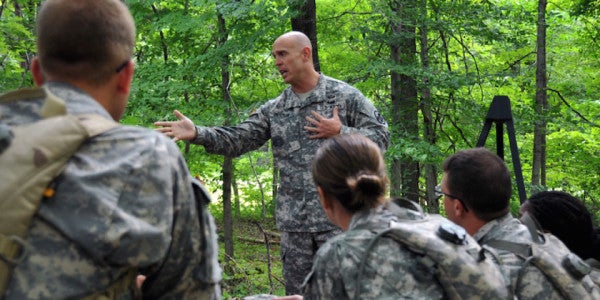 In 2012, Pulitzer Prize-winning journalist Tom Ricks, wrote an article called “General Failure,” followed by a book on the same subject, criticizing America’s recent military and political leadership for tolerating incompetent wartime commanders like generals Tommy Franks and Ricardo Sanchez. After two wars in Iraq and Afghanistan, each longer in duration than World War II, Ricks wrote that exactly zero of the U.S. Army’s hundreds of generals deployed to the field were relieved for combat ineffectiveness. On Sanchez’s underperformance in Iraq from 2003 to 2004, Ricks shared the conclusion of history scholar and retired Army colonel Andrew Bacevich: “Had Sanchez been a head coach or a CEO, he would likely have been cashiered.”

Sanchez and his colleagues, however, were Army generals and not CEOs or executives. Consequently, they never faced the consequences of underperformance from a dissatisfied corporate board or group of stakeholders. When it comes to enforcing standards and firing executives, as Ricks and Bacevich both note, the private sector seems to take more action than today’s U.S. military when dealing with ineffective or poor leadership. It seems dollars fuel more action than blood.

To understand this reality, it is important to understand that government organizations and private businesses do share a similar goal: survival. When that goal is threatened by competition, both public and private sectors make unpopular decisions in order to survive. During World War II, when the American government’s existence was threatened by the Axis Powers, Army Chief of Staff, Gen. George C. Marshall took action and fired many of his underperforming generals. Yet, following 1945, arguably no American war involved an attacking enemy (e.g., Nazi Germany or Imperial Japan) who threatened the federal government or the U.S. Army’s very existence; consequently, the top brass could protect underperforming generals without any real threat to the Army’s survival.

When the federal government and its military lack an existential threat, they hold a monopoly on power; thus, innovation and accountability are not essential for survival. In private business, however, where monopolies are illegal and competition is real, innovation and accountability are essential. To survive and prosper, ambitious private companies must promote innovative leaders, enforce their standards, and terminate underperforming executives. Companies who don’t do this — for example, Blockbuster Video — eventually lose to the competition and go bankrupt.

So what does this all mean for veterans?

If you are frustrated by a military culture that rewards seniority and resists change, then the private sector is for you. In order to survive and prosper, private companies reward performance and fight the status quo. Like the U.S. Army caught in total war with its existence on the line, the private sector — faced with perpetual threats from competition — hires, fires, and promotes with one primary factor in mind: merit.

Merit is brutal, merit keeps score, and a merit produces a leadership team that defeats the competition in order to protect a company’s prosperity, and ultimately, its existence. Simply speaking, merit means results. Whether a company sells goods or provides a service, it competes with other companies that do the same. Consequently, score is kept and future earnings, promotions, and job security are based upon the employer and the employee’s final score for each quarter or year.

Like a NFL football coach, and less like an Army general, in the private sector we are paid to win the game.