The Military Needs To Overhaul Its Personnel Management Practices

Personnel management is not just a problem in the military, it is a problem everywhere. A 2014 study released from... 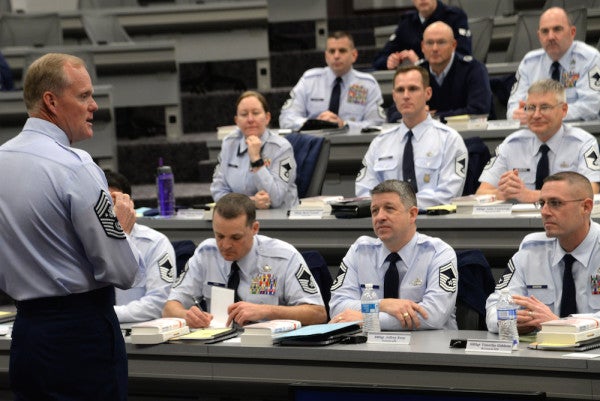 Personnel management is not just a problem in the military, it is a problem everywhere. A 2014 study released from the Society for Human Resource Management found that more than half of human resource professionals graded their company either a C+ or B in how they manage performance. Given the strong lack of faith in leadership highlighted by the recent Military Times series and the 2014 Navy Retention Study, the military would probably be lucky to get grades like that. The Air Force’s current effort to change the enlisted performance report and promotion system is just one example of how the military is trying to change its ways. Unfortunately, the problem with these changes is that they are often a generation behind current practices in human resources circles.

One of the cornerstones of military personnel management is stratification. Because the service operates unders an up or out promotion system, there is the constant need to determine where the cut line is among a group of individuals. This means that the primary question is how best to stratify individuals. The Air Force spent years revamping the enlisted performance review system in order to fight against grade inflation known as “Firewall 5s,” one system that made it impossible to tell which individuals are truly superior performers. Though many details have not been released, it's clear that the prevention of inflation in the new system will be implemented through a quota system. When preparing to make promotion recommendations, commanders will have four possible categories to place an individual in and only a certain percentage of individuals will be allowed in the top two categories.

This system is comparable to a ranking system in the corporate world called stack ranking, made famous by Jack Welch when he was CEO of General Electric. Stack ranking is a system that forces managers to give a certain percentage of their employees good and a certain percentage bad rankings. Two well known instances of stack ranking in recent years were implemented by Yahoo and Microsoft. Interestingly enough, both companies also previously used a one to five scale. Microsoft has been celebrated for getting rid of the stack ranking system. Yahoo, on the other hand, has been criticized for embracing the practice, as CEO Marissa Mayer has been trying to turn the company around to make it more forward-thinking. Both the one to five, numbered system of Air Force enlisted and the soon-to-stratification system for top officers can be compared with stack ranking, though they don't usually force leaders to explicitly identify poor performers.

The critics of stack ranking say that the system doesn't reflect the reality of today's workforce and the same can be said of the military. It creates artificial and unproductive competition between members, making it harder for people to work together. Most units only have one or two people doing the same job, meaning leaders will inevitably be comparing people who perform different functions, regardless of their Air Force specialty mode. Ultimately, it places an artificial limit on how many top performers a unit can have within its ranks.

If the services really want to address their problems with talent retention and make promotion performance based, they are going to need to think deeper about the changes they are willing to make. As already stated, this isn't just a military problem. Between 60 and 90% of employees dislike annual performance reviews. They are anachronistic mechanisms that date back to the 1960s where massive companies would employ hundreds of people doing the exact same job — think assembly line worker or typist. Those individuals would stay with a company for decades and slowly work to move up the pay scale. Today all those people have been replaced by machines and the workers who are left are hoping between jobs at an ever increasing pace. Similar changes have also been seen in the military.

Getting away from annual performance reviews would be the first major change that the services could adopt. How much can a squadron commander or even a flight commander remember about the job performance of an individual over the course of a year? At best, the appraisal is a broad approximation of what has been accomplished. If a supervisor had to meet monthly with their subordinates and give specific feedback about their performance, the feedback would be much more accurate and offer the ability for the ratee to rapidly change their performance. This would also ensure an individual could receive feedback from his or her supervisor several times.

Another big change could be to move away from broad rankings like “5” or “Definitely Promote.” In order to get serious about duty performance, reviews must grade a person's true job performance. Pilots may have no idea what it takes to be ranked in the top 1% of wing company grade officers because that is a very subjective ranking. However, their squadron commander could say that since an individual is their executive officer, he or she expects you to fly 15 hours per month. The same squadron commander could also look at their evaluators and say they are expected to give a certain percentage of evaluations that month. Allowing supervisors the flexibility to create meaningful criteria tailored to each individual takes away the subjective nature of broad evaluations statements. Encouraging the reviews to happen more often would also mean that missing the criteria on one review isn't a death sentence for one’s career.

There are obviously several ways the military could change performance reviews beyond these suggestions. One key attribute of the changes is that they should require an investment from the services into human resources technology, far beyond what has been done in the past. Software exists to make reviews much easier and individually tailored. The vast majority of time spent on performance reviews today is accessing the multiple systems in which information is shared, trying to remember what a ratee has done over the last year, and making sure the form is filled out correctly with no spelling errors. Proper software can make two of those problems almost go away and more regular reviews would limit the other.

The millennial workforce in general has been prepared to expect fast changes, receive continuous feedback, and wants to feel that they are making a difference in the bigger picture. If they are forced to stagnate in a job, don't know how they are performing, and can't tie their performance to the overall mission, they are going to move on and out of the military.

The military needs to make sure that when it is looking at new personnel management practices, it is basing them on the best practices of today's corporate world, not the 1960s.