3 Ways The Military Can Improve Recruitment And Retention Rates

Today is an interesting time for military recruitment. The number of military personnel on active duty is at one of... 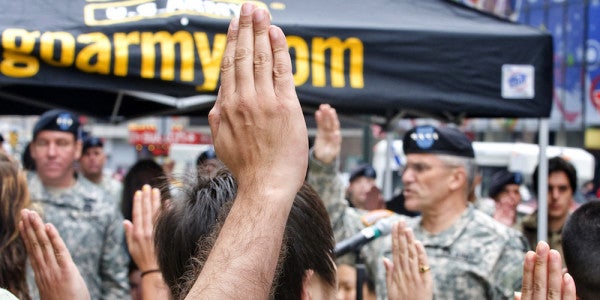 Today is an interesting time for military recruitment. The number of military personnel on active duty is at one of the lowest points in living memory, which means that it is important for each branch to find and retain the right people. Currently, the effort to do so seems to center around monetary compensation, either in the form of cash bonuses or educational funding. The deal is simple: do a job the military needs you to do, where and when the military needs you to do it, and the military will reward you. Unfortunately, trends such as the expansion of the Air Force's Aviator Retention Pay program in the year after a drawdown suggest that the deal is not working. But if money isn't enough to fill critical positions in the military, what would be? I think the answer can be found in responding to all of the wants and needs of people in uniform. Here are three ways the Department of Defense can do this better.

1. Recognize that service members’ calls for improvement come from some of our core values as Americans.

Shouldn’t military service members place the needs of their branch before their own? I think not. The job of the military, and each of its members, is to serve our country. As the Army’s Ready and Resilient website notes, the military depends on more than just its people in uniform. When well-trained service members are supported by competent civilians and maintain positive relationships with their families, things get done. When the military cares about itself to the exclusion of its people, those people get burnt out and the mission suffers. A service member who takes issue with a status quo that he feels does not enable him to optimally do his job is not a traitor. Nor is one who decides that she does not want to suffer through such a status quo for the possible opportunity to affect change. Rather, these service members are Americans in uniform expressing the individualism and drive for improvement that are an important part of our core values as a country. Embracing a perspective that views service members as Americans in uniform instead of focusing on the uniform to the exclusion of the American wearing it could offer a starting point for how to recruit and retain qualified personnel from future generations of citizens.

2. Find ways to appeal to those who are already service-minded.

Recruitment and retention efforts may need to evolve in response to changes in the operational environment and generational expectations. As the Sept. 11 attacks fade from the national memory and overseas deployments are pared back, there is no longer a clear call to arms. Furthermore, critical skills in areas such as computer science offer more lucrative opportunities outside of the military. These factors mean that future recruitment and retention efforts should consider how to make military service appealing to the already service minded, how to attract individuals with specific skills critical to national security, and how to make a life of military service acceptable given the plethora of more lucrative or more stable opportunities available in a life out of uniform.

How could the military accomplish these tasks? It could start by developing partnerships with other government organizations that are uniquely service-minded, such as the Peace Corps and the Corporation for National and Community Service, in order to identify what is appealing about public service in general and what factors lead people to eschew military service in favor of another form of public service. Additionally, the military could reach out to those people with critical skills in order to identify how to best incorporate them into national defense. Secretary of Defense Ashton Carter has already started this process as he announced in April the creation of a “defense innovation unit” in Silicon Valley to enable the leveraging of technology and other skills relevant to military needs.

3. Monitor service members’ decision to stay in or get out from Day 1.

After recruiting qualified and competent individuals, the military should be more proactive in gauging service members’ desire to stay on active duty or leave the military and the reasons for wanting to do so. While the branches’ release from active duty packets offer an opportunity for officers to explain their motivation for separating, collecting that information after someone has decided to leave is too late. Ideally, each branch should be able to monitor service members’ desired length of service and the factors which influence that desire. The sum of these data points could shed light on what is and isn’t working, which would in turn demonstrate if broader reform is necessary and show a path forward if reform is in fact warranted.

These are the issues I think about whenever someone asks me about whether I’m planning to remain in the military after my initial active duty service obligation. While that time is still over six years away, and I honestly have no idea what I will choose to do, one thing is clear: I would like to spend my time doing something fulfilling, in an organization that cares about my well-being, while working for people who respect their subordinates as much as themselves. Hopefully, that’s what I’ll find in the Army, and if I do, maybe I’ll stick around for a little bit longer.