Too often, I encounter veterans who believe their best days are behind them. My first week working for Team Rubicon... 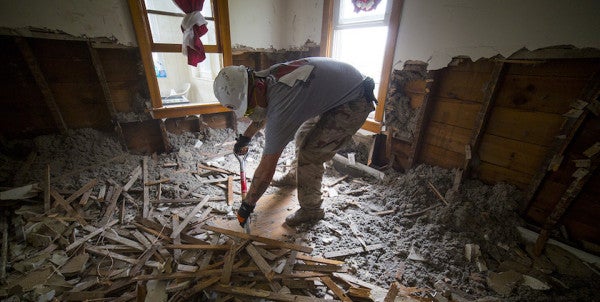 Too often, I encounter veterans who believe their best days are behind them. My first week working for Team Rubicon turned that notion on its head. It is a rare thing to be surrounded every day by people you admire. That is the position I found myself in late in 2013, shortly after accepting the job as chief operations officer for Team Rubicon, an organization that retrains military vets to deploy into disaster zones. This was a tiny team with big plans. When they said they intended to change the world, they — we — meant it.

During my drive west to start the job in California, a flash flood struck a mountain town in Colorado near my route. This was not a normal flood, but a 500-year event. Days earlier, a forest fire had scarred the upriver mountainside, leaving the terrain baked hard and unable to soak up moisture. Then, a massive storm dumped so much rain that the waterways swelled and ran together, and in three short hours, the lazy St. Vrain Creek, which a toddler could normally wade across, grew into a 25-foot-deep monster.

Team Rubicon set up a forward operating base in a Home Depot parking lot. Each morning, strike teams at the FOB suited up in their iconic grey t-shirts. Many talked with pride about trading one uniform for another, about discovering a renewed sense of purpose as a Team Rubicon Greyshirt. We loaded our trucks with gear, then set out for a full day’s work. The simplicity of the labor itself belied the complexity of the operation.

The command center at the FOB operated nearly around the clock, collecting damage assessments from field teams, assigning work orders, and managing volunteers who showed up to help. I spent my first few days mucking out homes: filling wheelbarrows shovel by shovel and digging through mud and debris that in some houses was piled four feet deep. On day three, my secret slipped out — I was the incoming chief operating officer for Team Rubicon. I got reassigned to ride shotgun with one of our field leaders, so I could better observe the challenges of running an operation this size.

I was awestruck by what I saw — how a tiny creek could become a raging torrent in a matter of hours. We came to a washed-out section of road with water still cutting through it. A hundred yards beyond was a bridge, which spanned nothing but the former riverbed, now dry. In the space of a single night, the creek had carved a new course, oblivious to the fact that a community had been built along it. Roads and bridges, houses and schools, all had been planned around where people assumed their river would always be. In the course of a single terrifying night, the river changed its mind.

As struck as I was by the force of nature’s fury, I was more impressed by the men and women of Team Rubicon. Greyshirt volunteers had taken time off from their regular jobs to stare down this flood, and to help victims on the worst days of their lives.

We came upon one elderly man whose home was inundated. This particular job was a big one — mud three feet deep throughout his kitchen and bedroom. One bucket at a time, Team Rubicon helped reclaim his home. The volunteers took great care, uncovering valuables and photos, and setting them aside like they were their own. I noticed one black and white photo, of the old man in uniform standing by a plane.

It was. The man was a veteran, a B-17 gunner in WWII. He fought in the same war as my grandfather, flying in the same type of aircraft my grandpa had piloted. When I told the man that the team helping him was made up of veterans, he broke down. He told me that the last time he had been this proud of his country was when the US Army liberated his POW camp in Germany.

When it comes to finding purpose, there is no better way than helping others in the aftermath of a disaster. Every night at our FOB, we cracked open a few beers and shared stories of the day behind us: the destroyed homes, the heartbroken families, the communities still reeling. But we also forged new bonds, the type of bonds I had not felt since leading crews as a combat recon pilot in the Navy. For many of the Greyshirts gathered in that Home Depot parking lot, Team Rubicon became family.

Within a year of my first mission, I saw the organization break new ground, defying the expectations of everyone except those who understood what vets are capable of. Team Rubicon was rated among the top 10 nonprofits in America to work for. Today, there are more than 40,000 members, standing by to deploy whenever disaster strikes. New chapters are now launching in other countries with military veterans from Australia, the United Kingdom, and Canada being given the chance to apply their skills and training in disaster zones around the globe.

Too often, I run into veterans who believe that the most important thing they will have ever done was serve in uniform. The way I see it, our time in the military is not only something to reminisce about. It is preparation for a lifetime of service. At Team Rubicon, our Greyshirts know that their best days lie ahead.