The Corps Is Ditching Its Recruiting Slogan, So We Came Up With 6 Replacements

One of the Marine Corps’ most iconic recruiting slogans — “The Few. The Proud. The Marines.” — is getting the... 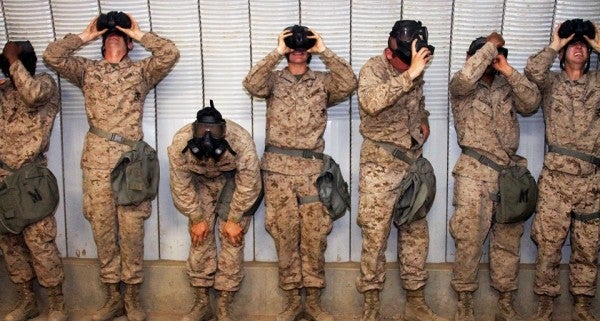 One of the Marine Corps’ most iconic recruiting slogans — “The Few. The Proud. The Marines.” — is getting the boot. As part of a new advertising campaign set to launch in 2017, the Corps is looking to redefine itself around one theme in particular: Fighting. That means it needs a tagline more in line with its new image, which we can only hope is all about kicking ass and taking names.

“The new products are going to frame everything that we do as a fight — a fight that we intend to win,” explained Lt. Col. John Caldwell, a spokesman for Marine Corps Recruiting Command, in a Marine Corps Times interview.

Related: MARSOC’s New Badge Should Be Replaced With One Of These 5 Insignias »

The current slogan has been around since 1977, and while it’s not the only one the Corps has used to bolster recruitment — think, “Nobody promised you a rose garden,” and “We’re looking for a few good men,” — it’s certainly iconic.

What other slogan conjures up the image of a Marine in resplendent dress blues vanquishing a lava monster with a sword? All that history, all those bad commercials, and the Corps is just going to ditch the line that got a lot of folks to sign up after a recruiter ambushed them at the mall. Understandably, this is likely to lead to a bit of grumbling online about the softening of the Corps, something, something “Old Corps,” oh, and thanks, Obama.

We asked our readers what they would suggest for the Corps’ next slogan. Here are six of our favorite responses:

We came, we saw, then waited for three months before the lieutenant admitted he was lost.

At some point in a Marine’s enlistment, there’s a good chance some butter bar is going to lead him or her on a wild goose chase somewhere, get lost, then take too long to realize it, though probably not three months. Two things are certain in the Corps, first someone will get everyone lost, and second, everyone else will spend entirely too much time waiting for things to happen.

It's not just a calling, it's a police calling.

Military service equips individuals with the skills they need to be successful in life and in their future careers, and no branch will do it better than the Marines, for that post-military job as a janitor. No, I’m joking, Marines leave the Corps with values and skills that prepare them for almost any challenge. That being said, they also spend a crap ton of time picking up garbage. Just think about it, how many times does a boot Marine police call each week? A couple times, maybe even a weekend or two, and if the platoon sergeant is a real dick, daily. In one year, the average Marine probably police calls a hundred times, or more. So, yeah, the Corps is a calling. A police calling.

The Marine Corps has a proud history, and it’s filled with dead bad guys, so why not own it? Ooh-Rah. Yut. Kill. Slay bodies, all day, everyday.

Unless, of course, we’re talking about a desk job like admin or public affairs. Then it’s just stacking paper.

Every Marine is a riflething.

The decision to make military occupational specialties gender-neutral led to a heated debate that played out on social media, and probably in the barracks, too, about what to rename jobs with the word “man” in them. Well, problem solved. Here’s one suggestion that’s sure to be equally inclusive, and disparaging, to all Marines regardless of gender.

The Marines: It will make up for your tiny wiener.

It’s no surprise that part of the Corps’ appeal is that it’s seen as being the toughest of the branches, and that, of course, means becoming a Marine will add a few extra inches to your pecker. No. No it won’t, but supposedly dress blues make any Marine a chick magnet, so go ahead and sign the dotted line, stuff a few rolls of dress socks into those trousers, and wait for the ladies to come running.

A few good bodies for this working party.

An honest slogan, the commercial for this should show an empty obstacle course in the background while guys in the foreground run around with rakes and brooms cleaning the sidewalk and tending to the base general’s well-manicured lawn. All set to some glorious 80s hair metal with awesome guitar riffs, incoherent drumming, and keyboard solos.