Today there is no shortage of reports concerning the 500 pilot shortage the U.S. Air Force is facing. An issue... 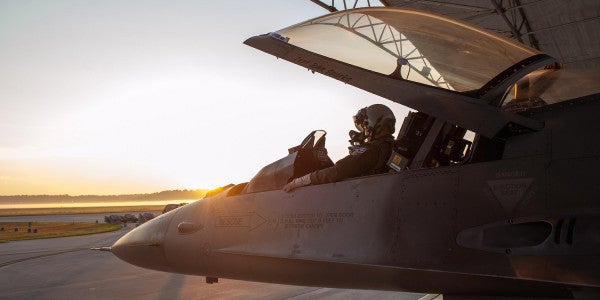 Today there is no shortage of reports concerning the 500 pilot shortage the U.S. Air Force is facing. An issue for several years, it's expected to get even worse. March 2015 Senate Armed Services committee testimony by senior Air Force leadership explained that “the shortfall evolved from force structure reductions that cut active duty fighter squadrons and fighter training squadrons to a number that cannot sustain billet requirements. As a result, the Air Force is currently unable to produce and experience the required number of fighter pilots across the total force.” Most recently, this has led the service to desperately draw for damaging solutions to correct the crisis.

This is a symptom of what’s actually a personnel management issue. Defense Secretary Ash Carter’s ambitious Force of the Future initiative seemed like a way forward, until it was revealed several months ago that interservice strife and internal debate had all but erased any hope of significant transformation. The most recent variation of Carter’s vision doesn’t address the original plans that would have affected the rated officer corps, and that is bad news for the Air Force.

Related: Why The Air Force Is Paying Big Bonuses To Some Pilots And Forcing Others Out »

A large part of the reason the Air Force can’t retain pilots is because they only spend a small portion of their career getting to do what they love, and more money will not solve this. Pilots spend countless hours and devotion pursuing mastery of their craft — a pilot must be well-versed in roughly 4,000 pages of intelligence, tactics, fundamentals, regulations, and procedures to be useful. But when they finally start gaining proficiency in applying this, they are often ushered onto something else. It is both ironic and glaringly obvious that what influenced the specialist aviator into entering service is often the same cause for his decision to leave. This is evident by the a 32% drop in the percentage of pilots taking the continuation bonus since 2010, each year worse than the prior. Currently, this take-rate is at the lowest levels since 2001, according to a fiscal 2015 report from the Air Force Personnel Center.

To the naysayer who may quip “good riddance,” these supposed outliers are the ones we cannot afford to lose. They are some of the best and brightest within their career fields and many have both vision and visibility, which is probably why they are seeing things others are not. When they leave, we no longer have the best; we simply have the best of what’s left.

This world has been defined by the archaic up-or-out policy since 1947. Compounding this, retention rated officers at expiring contracts are challenged by constraints on capability, capacity, and resources — that is the push. The pull is the promise of lucrative prospects on the outside, well beyond the airline industry. The leadership skills and experiences of a mid-career officer make a prime recruit for corporations.

This is manifesting itself at a time when the generalist organization is appearing to come to grips of the growing reliance on the specialist in today’s Air Force. Gen. Hawk Carlisle, commander of Air Combat Command, recently testified that when an airman separates, “we do not just lose a body in the cockpit. We lose their expertise and experience too. While on paper, personnel may be a one-for-one swap that populates spreadsheets, their experience is incalculable and irreplaceable.” This was echoed in a speech by Gen. Frank Gorenc last year when he posed a rhetorical question to the crowd: How long does it take to replace an airman with 10 years of experience? It takes 10 years!

It’s time to apply effects-based operations to the antiquated manpower construct. What if it is possible for specialists and generalists to co-exist in a habitat that actually improves cohesion, continuity, camaraderie, and ultimately combat effectiveness? It is.

If someone can have a successful career in politics without running for president, officers can have a successful career without running to becoming a general. The Air Force needs to formally recognize there are all types of leaders in need. Some are needed to lead organizations with management prowess. Other leaders are needed to lead people by exuding tactical proficiency through experience and tenure.

The way forward involves two solutions: adopt the warrant officer and limited duty officer concepts from the other services.

The warrant officer: thinning out traffic

The benefits of a warrant officer corps are well-documented among all the other services. For the Air Force, the prime candidates for this solution are found in the small, yet specialized career fields. One of the best examples is the aircraft maintenance and munitions officers field, which accounts for only 5.5% of all Line of the Air Force officers. Some of these should be partitioned for warrant officer status, where they can co-exist with traditional commissioned maintenance officers. This is also very similar to what the Navy and Marine Corps have done. This is only part of the solution though. The real change has to come from the management of the 15,000 plus rated pilots and navigators: 30% of the LAF officer corps.

The limited duty officer: An off-ramp

Second, to solve pilot retention, give rated officers (pilots, navigators, and air battle managers) the option to have a fully sanctioned and supported career path in the cockpit. Simply create an off-ramp for the specialists on the generalist production superhighway by establishing a limited duty officer program. Title 10 U.S. Code section 5589 covers the limited duty officer, but is currently limited to the Navy and Marine Corps. An inverted variant of a warrant officer, Air Force limited duty officers should come solely from active-duty aviators through an application process that is founded in credibility (instructor, evaluator, etc.), not credentials (school, staff, etc.). This is strikingly similar to how guard and reserve units hire exiting active-duty aviators.

This would finally lend credence the current total force integration initiative without fighting the concurrent bureaucracy that accompanies it.The limited duty officer would essentially perform the role of a seasoned active guard reserve officer, fulfilling a critical gap of skills and continuity in the field of generalists whose assignment length is predicated solely on career advancement. Limited duty officers would not have to tend with up-or-out promotion rules, but they would willingly be giving up possibility of command and other staff assignment pursuits of the generalists.

This would have numerous second-order effects; effects that are starting to become more obvious to the masses. The rated staff allocation plan, which apportions staff billets based on leveraging experience and background, has been critically short of fighter pilots over a decade. Shorting these billets breeds poor decisions and further exaggerates the frustration of the rated officers left to deal with these actions.

The key to stop the hemorrhaging of rated officers and setting the force on solid footing is simple. The hard question remains: Is the solution too simple that it is thrown away immediately in the quest for a complicated solution?