Not long ago, the Marine Corps finished cutting nearly 20,000 leathernecks by a combination of greater attrition, various exit incentives,... 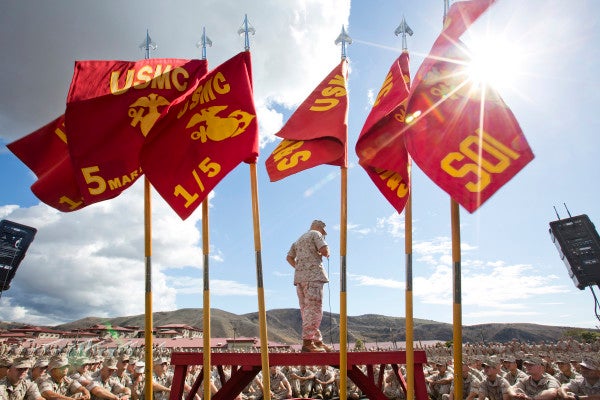 Not long ago, the Marine Corps finished cutting nearly 20,000 leathernecks by a combination of greater attrition, various exit incentives, and forcing some Marines out. The Marine Corps told thousands of Marines who wanted to stay that they just weren’t wanted anymore.

It didn’t take long for things to change. The service’s annual retention survey, which was recently obtained by Marine Corps Times, shows the Corps may soon be forced to start begging those Marines to stay who might have been on the chopping block not long ago.

The survey broke down the top reasons that Marines are leaving the service. The first few are not really big surprises — the very first reason is “civilian job opportunities.” This is a perennial problem for the military ever since the all-volunteer force debuted in the 1970s. The military is often at the mercy of the economic cycle. When there are more jobs on the outside, fewer people want to be on the inside. That makes recruiting and retention a lot harder. People don’t want to miss out on what they believe might be once-in-a-lifetime opportunities. This reason works hand in hand with the third most common reason Marines are leaving the Corps: pay and allowances. After years of strong military wage growth in combination with large retention bonuses, the gravy train has slowed down. In a strong economy, more Marines are willing to take their chances on getting better deals in the private sector.

A similar story holds for second most common reason: the desire to attend college, and the fifth reason: G.I. Bill benefits. We’re practically paying people to get out of the military and go to college. Of course they’ll do it, given the opportunity.

But if they were truly happy being Marines, those reasons would be a lot less compelling. The remaining reasons found by survey respondents were a lack of job satisfaction, poor command leadership culture, the number of hours worked, and inability to take time off.

And therein lies the problem. Whether they admit it or not, the bulk of most Marines’ enlistments is spent at home. Not that long ago, that “dwell time” was usually for recuperation and gradually building up a unit for its next deployment. Increasingly, units returning from deployment are stripped to the bone so that the next deploying unit can make it out of the gate. The now-skeletal unit also has to pick up every odd task and detachment. Often, even well-meaning commanders find themselves taking a hard line on their people in order to meet all of the tasks they receive from higher headquarters. This is what “doing the same with less” means.

Marines are rightfully proud of their expeditionary nature — going overseas to deploy and kick ass. This is what gives the hardships of Marine life meaning. But now many deployments lack the sense of urgency and purpose that gave Iraq and Afghanistan deployments meaning, despite their hardships. A deployment to the Mediterranean, stopping at scenic ports, yet chafing under restrictive liberty rules, is an inadequate payback for all the months of scraping by at home.

The Marine Corps, just like the other services, finds itself in a dilemma. It can’t invent a war just to help retention. And under sequestration, it can’t just open the money faucet of pay and bonuses to bribe people to stay in.

The only way out of this pit is something the Corps has always prided itself on: leadership. In this case, leadership doesn’t mean just the usual platitudes. It means that the organization has to look upon its people as its center of gravity. Without people, the guns don’t shoot and the planes don’t fly.

Just like in life, the best things are free, or nearly so. Secretary of Defense Ash Carter has hit on many of them in his Force of the Future initiative. Allowing more broken time, ending “up-or-out,” and enabling technical career paths will help retain the experts who the Corps and the other services need.

In concert with this, Marine leadership needs to take a look at what Marines are spending their time on. Picking the low hanging fruit of unnecessary garrison training, such as “safety stand downs” would send a visible message that the focus of the Corps is combat readiness. Same with eliminating the plethora of zero-defect-allowed “dog and pony” shows that strain units during their refit periods — does Cleveland really need a Marine Week?

Money is a great retention tool, and while it was available, it made retention a lot easier; just add another zero to a bonus check. Those times are over. The Corps has made the mistake of thinking its people are indentured servants. As long as the money was there and the opportunities outside weren’t that good, it could treat them however it wanted. Today’s fiscal austerity may have the unintended positive effect of forcing the organization to treat its people as the assets they are and not just as a cost of doing business.