Five years after the U.S. military withdrew from Iraq, American service members are again deployed in support of operations there.... 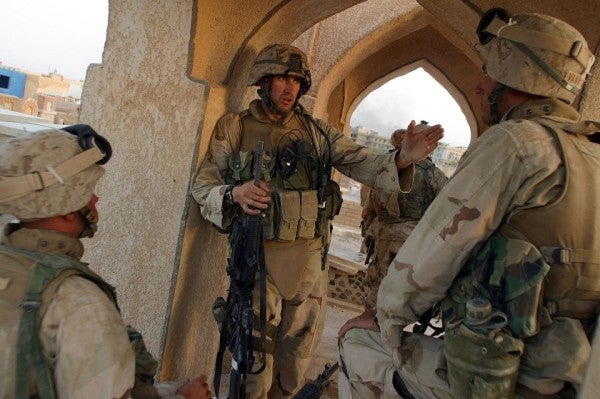 Five years after the U.S. military withdrew from Iraq, American service members are again deployed in support of operations there. Some of these servicemen and women are returning to areas they deployed to years ago, engaged in a new mission against a different enemy: the Islamic State in Iraq and Syria.

A new plan, proposed by Rep. Seth Moulton of Massachusetts in September 2016, aims to provide a clear end state for military operations in Iraq after ISIS is defeated, by placing emphasis on policy, rather than military force.

Related: In His Run For Congress, This Iraq War Vet Isn’t Running From PTSD »

The strategy is based on an extensive review of U.S. policies in Iraq and incorporates findings from Moulton’s oversight visits as a member of the House Armed Services Committee. In addition, the plan draws on more than a year’s worth of meetings with foreign policy experts, academics, military leadership, and troops on the ground, as well as Moulton’s own experience as a Marine infantry officer. Moulton served four tours in Iraq, including two tours as a platoon commander, first during the 2003 Iraq Invasion, and then during the Battle of Najaf in 2004. He spent two tours as a special assistant to Gen. David Petraeus during the troop surge and worked on counterinsurgency operations South of Baghdad, before leaving the Marines in 2008 as a captain. In 2014, Moulton was elected to Congress, representing Massachusetts's 6th district and currently serves on the House Armed Services Committee, the House Budget Committee, and the House Small Business Committee.

“I saw firsthand how important it is for those of us on the front lines to have a mission,” Moulton explained to Task & Purpose. “You need it for two reasons. One, because it’s the only way to ultimately win and go home; and two, because it’s fundamentally unjust to ask young Americans to risk their lives for something we can’t even define.”

Rep. Seth Moulton of Massachusetts while serving as a U.S. Marine infantry officer during the Battle of Najaf in Iraq in 2004.Photo courtesy of Seth Moulton

The goal of Moulton’s plan is to create an environment for a sovereign, independent Iraq that is representative of its people, allied with U.S. interests and able to maintain its own security against foreign against foreign and domestic threats.

“The point is that we’ve got to tailor our military efforts to what political goals we want to achieve. We have to agree on the political plan first, then the military effort should support that,” said Moulton. “One of the problems when we pulled out of Iraq was we weren’t clear about how we needed to help the Iraqis maintain political stability in our absence. I think if we had been clear about that, we might have left a few troops there. Instead, we left, the government fell apart, and now we have to go back and re-fight many of the same battles we fought and won several years ago.”

Some of the plan’s key points include the need for greater Sunni representation in parliament; legitimate agreements between the Iraqi and U.S. government; and a more robust State Department presence, which has seen a steady decline from 20,000 personnel in 2010 to less than 2,000 today, the majority of whom are security and support contractors, not diplomats. Additionally, Moulton argues that Iran’s influence must be significantly curtailed, and arms and military support should be dependent upon the Iraqi government's ability to meet measurable benchmarks.

“I make no allusions that this will be easy, it’s just far better than continuing to refight the same battles,” said Moulton. “We can defeat ISIS, but if we just leave and go home, I guarantee we’ll find ourselves back in Iraq five years to today, just like we’re back in Iraq now, five years after we left in 2011.”