The former commander of U.S. Southern Command, retired Marine Gen. John Kelly, has been selected to serve as the secretary... 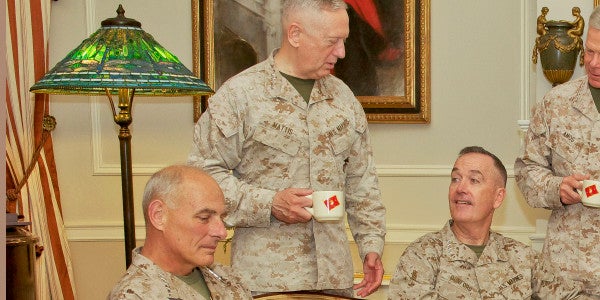 The former commander of U.S. Southern Command, retired Marine Gen. John Kelly, has been selected to serve as the secretary of Homeland Security in the incoming Trump administration, according to CBS News. Now, no fewer than three current or former Marine four-star generals promise to be key members of Trump’s initial foreign policy team.

Mattis will work closely with Marine Gen. Joseph “Fighting Joe” Dunford, the chairman of the Joint Chiefs of Staff, who will continue in that capacity through Trump’s inauguration.

On Dec. 6, Stars and Stripes reported that Dunford could stay on for an extended role as Joint Chiefs chairman, due to his deep ties to Mattis.

Related: Some Call This Mattis’ One Mistake In Battle — A Legendary Marine Says Otherwise »

Former members of the Marines, the military’s smallest but proudest branch have gone on to become senators, governors, and senior government officials. But never has a former Marine become president of the United States. Perhaps with the elevation of these Marines into senior foreign policy roles, that could change.