An Army sergeant accused of failing to properly secure three Humvees that plunged to their spectacular destruction during a parachute... 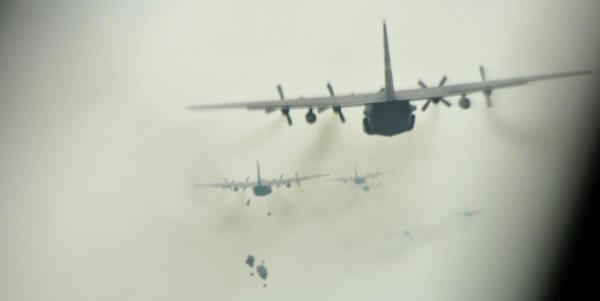 An Army sergeant accused of failing to properly secure three Humvees that plunged to their spectacular destruction during a parachute jump in Germany last year is headed to court-martial, Stars and Stripes reports.

Brig Gen. Tony Aguto, commander of the 7th Army Training Command, has decided to proceed with a court-martial against Sgt. John Skipper, who stands charged with destroying government property and making a false official statement. No arraignment date has been set, Stars and Stripes reported on Aug. 8.

Skipper, 27, is assigned to the 173rd Airborne Brigade’s 1st Squadron, 91st Cavalry Regiment in Grafenwoehr, Germany, a town about an hour’s drive north of the Hohenfels Training Area in Bavaria, where the incident occurred on April 11, 2016 during the Army’s annual Saber Junction exercise.

Skipper’s case has received widespread attention thanks to a viral video of the ordeal that surfaced on the internet soon after it took place. The footage shows the trio of Humvees slip from their riggings after they roll out the backs of C-130 Hercules transports over a field in Hohenfels. Each vehicle was utterly destroyed.

The video — which has been viewed more than a million times on YouTube — has already earned an unidentified sergeant first class an administrative letter of reprimand. The sergeant, an “observer trainer coach” assigned to the 7th ATC’s Joint Multinational Readiness Center, filmed the incident from the ground and is heard laughing and cheering as the Humvees fall from a fleet of C-130 Hercules transports.

“The reprimand addressed the unprofessional comments the soldier made during the video, and the fact that he shared the video with others, which resulted in it being posted to social media by an unknown individual,” Christian Marquardt, a 7th ATC spokesman, told Stars and Stripes.

Skipper, who was charged in May, faces a more daunting fate. However, the extent of his punishment largely depends on whether or not the Army concludes he improperly rigged the Humvees on purpose.

According to Stars and Stripes, Army officials declined to specify which of the two charges Skipper is facing. Whether intentional or negligent, the damage, destruction, or loss of government property is an offense under Article 108 of the Uniform Code of Military Justice.