Last year, the internet was treated to a video of three Humvees plunging to their doom from a fleet of... 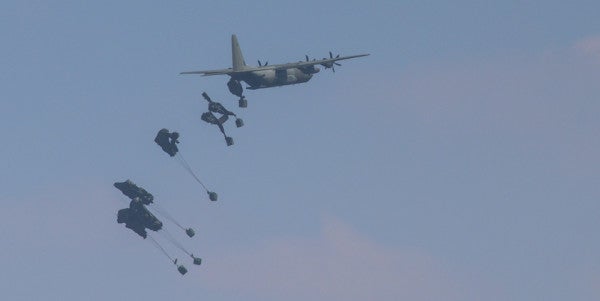 Last year, the internet was treated to a video of three Humvees plunging to their doom from a fleet of C-130s during an Army parachute jump in Germany. Despite the footage’s popularity, the only things we knew about the incident at the time were that it involved the 173rd Airborne Brigade and heads were definitely going to roll.

Now, we know that one of those heads belongs to Sgt. John Skipper of the 173rd’s 1st Battalion, 91st Cavalry Regiment. Skipper has been charged with destruction of government property and making a false official statement regarding his conduct during the incident, brigade spokesman Maj. Juan Martinez told Stars and StripesonJuly5.

If convicted, Skipper could face a maximum penalty of 10 years in prison and a dishonorable discharge. However, as Stars and Stripes reports, a recommendation on whether the case will proceed to court-martial is still pending. “Should this case progress, we will continue to release information consistent with Army policy,” Martinez said.

Does the punishment fit the crime? Well, for context: A Humvee can cost up to $220,000, has a curb weight of 5,200 lbs, and explodes like a watermelon when it hits the ground after falling hundreds of feet. We know this because on April 11, 2016, three Humvees were rolled out the backs of C-130 Hercules transports over a field in Hohenfels and slipped from their riggings as their parachutes deployed. Each vehicle was utterly destroyed.

The jump was part of the annual Saber Junction training exercise, which in 2016 featured nearly 5,000 participants from 16 NATO and European nations. The Vicenza, Italy-based 173rd Airborne was the focus of that rotation, and the goal was to evaluate and certify the unit’s readiness to conduct unified land operations, “with an emphasis on tactical interoperability among the Allied and partner-nation forces,” according to the Army.

“The specific malfunctions that occurred on this day are under investigation,” Martinez said in an email to Army Times several days after the video of the free-falling Humvees surfaced on the internet shortly after the incident occured. “There were multiple rehearsals and inspections of the equipment prior to mission execution.”

The video may have added extra pressure on the Army to quickly identify the person or persons responsible: between Facebook and YouTube, the footage has been viewed more than three million times. Some of that popularity probably owes to the commentary accompanying the footage. Instead of shock, the falling Humvees elicit cheers and laughter from the filmmaker and his pals. “Burn in, baby!” one screams after the first Humvee falls.

As Stars and Stripes notes, the charges against Skipper suggest that human error, rather than an equipment malfunction, is to blame for the embarrassing — and costly — episode.

In addition to the Humvees, the C-130s dropped 150 supply bundles, vehicles, communications equipment, and indirect weapons systems. All floated safely to ground.