The long-range SR-71 Blackbird recon jet, dreamed up by Lockheed Martin’s famed Skunk Works division, has a reputation for a... 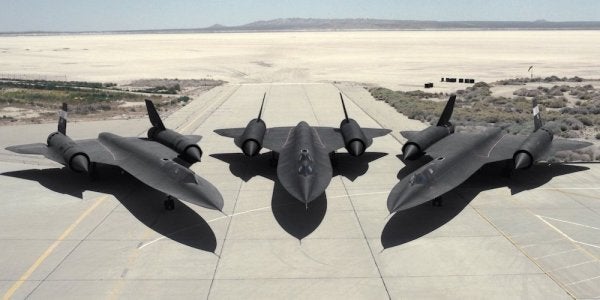 The long-range SR-71 Blackbird recon jet, dreamed up by Lockheed Martin’s famed Skunk Works division, has a reputation for a reason.

In the half-century since it first took flight at Air Force Plant 42 in Palmdale, California, the Blackbird has unseated its record-setting Lockheed YF-12 predecessor as the world’s fastest jet-propelled aircraft, its twin afterburners capable of unleashing 34,000 pounds of thrust and accelerating the interceptor up to 35 miles per minute — 3,100 feet per second, per War Zone’s Tyler Rogoway. No wonder the SR-71 became the preferred delivery craft for specially trained and colorfully attired multinational paramilitary squads: Of all the aircraft ever conceived by the U.S. Air Force, the Blackbird is most synonymous with speed.

Luckily, you can now spend all day watching the SR-71 and the YF-12 scream across anonymous skies, if you so desire. Over the weekend, NASA’s Armstrong Flight Research Center decided to crack open its vault and publish archival footage from decades of flight tests at Dryden/Edwards Air Force Base on its YouTube channel.

While the cache of hundreds of videos includes some random gems (like the landing of an ill-fated horned XB-70A Valkyrie), our favorite SR-71 fanboy, Rogoway, surfaced a handful of fantastic clips of two Blackbirds stretching their wings over southern California. Let’s take a gander, shall we?

On the 51st birthday of the SR-71, Rogoway noted at Foxtrot Alpha that the “official” Blackbird ceiling was around 85,000 feet — nowhere near the Kármán line that separates Earth and outer space at 330,000, but close and stuff!

The test in the first video is no science experiment. Per Rogoway, the SR-71’s titanium skin could reach temperatures as high as 900 degrees Fahrenheit at maximum velocity — hot enough that the aircraft would grow by six inches bow to stern, the most impressive six-inch growth under steamy circumstances in the history of mankind.

Taking off is easy; landing is far more difficult. Perhaps that’s why 40% of the Blackbird fleet didn’t survive operational tests, per Rogoway. Shame.

Yes, sure, this archival footage won’t keep you occupied all day, but it’s sweet enough to hold us over until Lockheed reveals new details of that proposed ultra-secret SR-72 successor. Until then, there’s always X2: