This Hoverbike Is The Stuff Star Wars Fans Dream Of

As a kid, did you dream of riding around on a futuristic aircraft that combined high-speed flying with the ease... 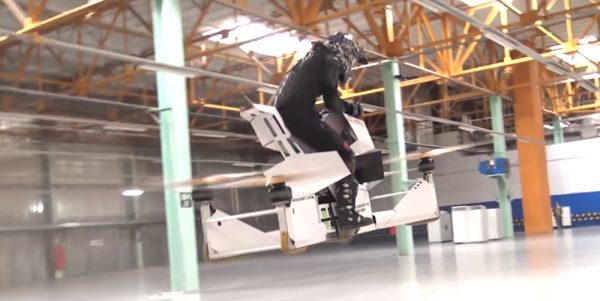 As a kid, did you dream of riding around on a futuristic aircraft that combined high-speed flying with the ease of of riding a bicycle? Most of us who have seen “Star Wars: Episode VI Return of the Jedi” did. Now, that dream is finally becoming a reality.

A San Francisco and Moscow-based company called Hoversurf just dropped this epic trailer for the Scorpion-3 — one of the world’s first manned hoverbikes.

Using quadcopter technology, Hoversurf designed the Scorpion-3 as though it were a motorcycle.

Currently, Hoversurf sees its vehicle as an “extreme sports instrument.” However, it is also pursuing commercial transportation projects. In 2018, the company plans to launch a drone taxi called MARK-S.

Several other companies like Malloy, Aeofex, E-volo, and Ehang, have similar prototypes to Hoversurf’s Scorpion-3, according to the Verge. But it will likely still be awhile before these aircraft take to the skies.