Marines love Gen. James Mattis, and with good reason. He’s a Marine’s Marine, which means he always speaks his mind.... 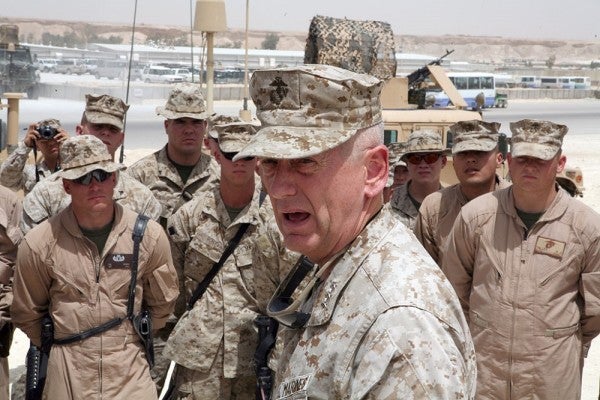 Marines love Gen. James Mattis, and with good reason. He’s a Marine’s Marine, which means he always speaks his mind.

A former enlisted Marine who entered the Corps in 1969, Mattis received his commission as an infantry officer in 1972. He served in the Persian Gulf War, where he commanded 1st Battalion, 7th Marines. Mattis led Task Force 58 into southern Afghanistan at the onset of the war. In Iraq, he commanded troops during the first and second Battles of Fallujah, and alongside now-retired Army Gen. David Petraeus, oversaw the development of the Army and Marine Corps counterinsurgency doctrine that would come to define and shape both wars.

In 2013 Mattis left his post as commanding general of United States Central Command and retired from the Marine Corps after 44 years of service.

Widely admired for his keen intellect and fairness — Mattis has been referred to as the “Warrior Monk” — his frankness has endeared him to post-9/11 Marines and veterans, with whom he holds an almost legendary cult-status. Many modern military veterans, like this author, can recall seeing his quotes — often referred to as“Mattis-isms” — on the walls at MOS school, in the hallways of headquarters buildings, or piling up in Facebook newsfeeds as memes.

Here are Task & Purpose’s five favorite quotes from one of the Corps’ most respected living legends.

“Be polite, be professional, but have a plan to kill everybody you meet.”

Taken from a speech Mattis gave to his Marines when they arrived in Iraq in 2003, these are words to live by in an asymmetrical battlespace, where enemy combatants attack without warning before blending back in with the local populace.

“I come in peace. I didn't bring artillery. But I’m pleading with you, with tears in my eyes: If you fuck with me, I’ll kill you all.”

After the initial invasion of Iraq, Mattis met with Iraqi military officers in 2003 and delivered these cautionary words — his own take on “big stick policy.”

“The first time you blow someone away is not an insignificant event. That said, there are some assholes in the world that just need to be shot.”

While speaking to Marines at Al Asad Airbase in Iraq, Mattis encouraged them in his typical fashion to stay sharp and carry on their mission. The quote first appeared in print in Thomas E. Ricks’ book “Fiasco: American Military Adventure in Iraq, 2003 to 2005.”

“Marines don't know how to spell the word defeat.”

Though the origin of this particular adage is unclear, it’s probably one of the most popular Mattis-isms out there. It has also lent credence to the long-standing joke that Marines are too dumb to spell defeat. We’re not. The word just isn’t in our vocabulary.

“You are part of the world's most feared and trusted force. Engage your brain before you engage your weapon.”

Mattis wrote this letter and had it delivered to each of his Marines on March 19, 2003, one day before the initial invasion of Iraq. In addition to providing words of encouragement, Mattis implored his men to remember who they are, where they come from, and the branch they belong to.