There are decisions that military leaders must make in times of war that live with them forever. Recently, a 15-year-old... 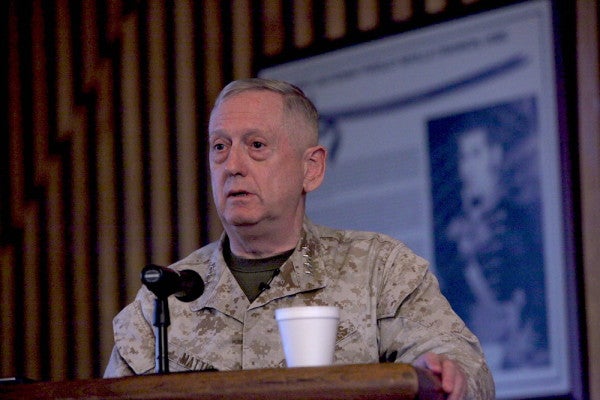 There are decisions that military leaders must make in times of war that live with them forever. Recently, a 15-year-old combat decision made by retired Marine Gen. James Mattis, who has been selected to served as Secretary of Defense in the Trump Administration, has drawn scrutiny. But at least one legendary Marine spoke to us about the complexities of such decisions, and the life-and-death nature of combat leadership.

On Dec. 5, 2001, 11 men with Special Forces A-Team ODA 574 were sent on a mission to protect future Afghanistan president Hamid Karzai in Kandahar. Karzai, who had been exiled, was raising a Pashtun militia to overtake the Taliban while the U.S. Army provided cover with precision airstrikes. But things went to hell when a 2,000-pound joint direct attack munition was dropped on the team. It was friendly fire.

Immediately, unit leader Capt. Jason Amerine sent a mass casualty evacuation request to Camp Rhino, a base 45 minutes away by helicopter. In charge of personnel on the base for a mere 10 days, was Brig. Gen. James Mattis , then-commander of the 15th Marine Expeditionary Unit, who was briefed on the situation by Maj. Rob Cairnes and B-Team member Master Sgt. David Lee.

Eric Blehm, author of “The Only Thing Worth Dying For,” a book that chronicles the events of that day, wrote that Mattis rebuffed the men: “‘… if they’ve taken fire,’ said the general, ‘and you can’t tell me definitively how they got all scuffed up, I’m not going to send anything until you can assure me that the situation on the ground is secure.’”

Business Insider, when reporting on this story earlier this year, wrote, “This may have been legendary Marine Corps General Mattis' one mistake in battle.”

In recalling the events for Blehm, Cairnes and Lee said Mattis further explained that there were around 1,000 Marines at Camp Rhino for him to worry about, and he was not willing to dilute base security or the safety of his men by sending a squadron on a dangerous daylight mission to assist an unknown number of casualties.

Blehm told Task & Purpose that Mattis agreed to be interviewed about the incident, but it was long after the book had been published. And Mattis still has yet to make any public comments about the events of that day.

Since then, however, Amerine has been an outspoken critic of the way the rescue mission was handled, often speculating about Mattis’ inaction and calling him to account.

“He was indecisive and betrayed his duty to us, leaving my men to die during the golden hour when he could have reached us,” Amerine wrote in a Facebook post on Dec. 2 that has since been removed.

Blehm understood the unit’s frustrations. “As far as … those guys were concerned, it didn't matter. Americans were wounded, dead, or dying and Mattis was the closest with the ability to respond — and they refused.”

But Bing West, a Vietnam Marine who led hundreds of patrols in Vietnam, served as assistant secretary of defense for international security affairs under Reagan, and is now co-authoring a soon-to-be released book on Mattis’ combat leadership experience, told Task & Purpose he believes this decision did not constitute negligence, nor was it a mistake.

“His obligation is to everybody else,” he said. “It is right and proper that the Special Forces captain would storm into somebody else’s office and say, ‘I need this now.’ At the same, the commander, Brig. Gen. Mattis in this case, has to evaluate where he stands with his assets.”

Just four years after, U.S. forces in Afghanistan made that mistake during Operation Red Wings. A four-man SEAL reconnaissance and surveillance team was tasked to hunt a top Taliban commander, but when they failed, U.S. forces sent in a hasty rescue mission which resulted in the deaths of eight Navy SEALs and eight Army special operations soldiers. Marcus Luttrell, the lone survivor of that original SEAL team, went on to chronicle the experience in his book “Lone Survivor,” which was also made into a feature film.

“Every level of a chain of command has the absolute obligation and duty to evaluate the situation and weigh the risks of more casualties — more deaths — against who they can rescue,” West added. “That goes on every single time you go into a firefight.”

In his book, West said, Mattis will finally be addressing the Dec. 5, 2001 incident.

However, regarding the resurgence of the story in the news, West added, “There was nothing hidden about the whole thing. They lost helicopters there, aircraft … the area there was a goddamn dust bin. You knew sooner or later something was going to happen there. You couldn’t avoid it.”