Republicans in the Senate this week voted to strike down an Obama-era administrative rule barring firearms purchases by roughly 75,000... 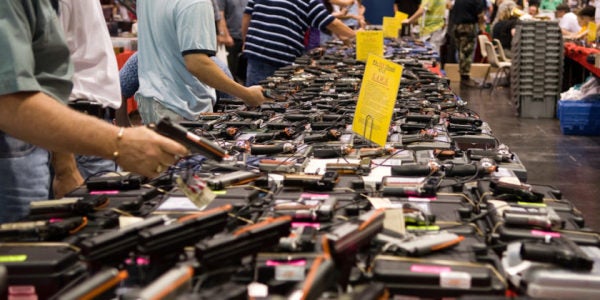 Republicans in the Senate this week voted to strike down an Obama-era administrative rule barring firearms purchases by roughly 75,000 Social Security recipients deemed mentally ill. On Feb. 2, the House also voted to eliminate the rule. They were probably right to do so, even if they did it for the wrong reasons.

Critics had said the rule — a good idea in theory — was basically a plot to disarm everyone’s grandmas. “This is one more reminder of the petty, partisan politics of Barack Obama,” the National Rifle Association growled when the rule was approved in December. Partisans on both sides offered up scads of half-truths about the rule, painting liberal supporters as gun-hating totalitarians and conservative critics as dangerous nuts in search of company.

The original rule had been part of a broader Obama administration strategy, after the 2012 Sandy Hook massacre, to prevent guns from getting into the hands of the mentally disturbed. At first, the liberal president and the right-leaning NRA seemed to be in agreement on that mission. “How can we possibly even guess how many” more spree shooters might come, “given our nation’s refusal to create an active national database of the mentally ill?” asked NRA executive vice president Wayne LaPierre in his first major speech after Sandy Hook.

Federal officials spent several years trying to develop the rule, seeking standards that would maximize safety while minimizing the number of people who were affected. Announced last December, it directs the Social Security Administration to share names of disability recipients who are deemed mentally impaired and have a representative payee who receives their monthly disability compensation on their behalf as a result of their mental condition. Under the rule, those names would have been fed into the National Instant Criminal Background Check System, meaning they’d be flagged on a gun-purchase background check. The rule was set to kick in next December. The Department of Veterans Affairs has a similar reporting program that’s sent hundreds of thousands of names of “mental defectives” in VA care to the background-check database since it was rolled out in 1998.

Mental health professionals and civil rights activists said it had no basis in science, unfairly stigmatized the disabled, and was so broad it could deprive many high-functioning citizens of their Second Amendment rights.

But the new Social Security reporting rule lacked some of the VA system’s safeguards, and it caught serious flak from more than just pro-gun conservatives. Mental health professionals and civil rights activists said it had no basis in science, unfairly stigmatized the disabled, and was so broad it could deprive many high-functioning citizens of their Second Amendment rights. “Someone can be incapable of managing their funds but not be dangerous, violent or unsafe,” Dr. Marc Rosen, a Yale psychiatrist with experience analyzing vets who couldn’t handle their own finances, told the LA Times in 2015. “They are very different determinations.”

On the other hand, the issue may have been less about the mentally ill than their caretakers. Social Security fraud is already rampant among representative payees who manage the affairs of disabled recipients. The idea that a representative payee could not only siphon dad’s benefit checks, but also make “straw purchases” of firearms for other people, was a real possibility — one that the government never bothered to study or quantify before the Obama rule went into effect.

The Obama rule’s long gestation, brief life, and impending death; however, get at the heart of a knotty gun-policy problem. Virtually everyone in America, including the firearms lobby and Trump, agrees that limiting access to guns by violently disturbed people is a good thing. But just about everyone — from hardcore gun guys to bleeding-heart mental health advocates — also opposes invading Americans’ medical privacy to do it.

Unless, that is, you’re a veteran in the Veterans Affairs system. The VA’s reporting system sent 167,815 names of vets to the national no-gun database between 1998 and 2016. One senator proposed a change to that process last year, but it never got a vote.

So far, it’s not on the congressional agenda this year.