Need A Hand? These Advanced New Bomb Disposal Robots Can Help With That

There was a pretty clear theme at this year’s Office of Naval Research Tech Expo in Washington, D.C. on July... 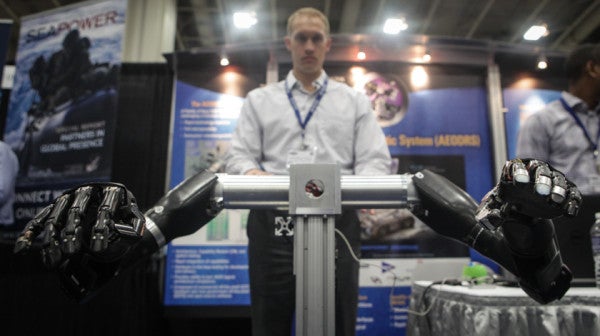 There was a pretty clear theme at this year’s Office of Naval Research Tech Expo in Washington, D.C. on July 20: Robots and lots of them. Big ones, small ones; drones that fly, some that swim, and at least one that did both; and a few bots that could probably kick ass in an arm wrestling competition.

But some of the most impressive robots at the expo were focused on an important task: bomb disposal. Among the rigs on display was the Highly Dexterous Manipulation System, a bomb disposal platform from RE2 Robotics now in its fourth iteration:

The HDMS isn’t so much a robot as an extension of its operator. The bot has a pair robotic arms and a moveable humanoid torso, which allow it to mimic a person’s full range of upper-body motion with far greater strength.

“It can do what humans can do, but on top of that, can lift 110 pounds close-in,” can drag and pull items, and lift or manipulate light objects when its arms are fully extended, RE2 Robotics production and engineering coordinator Aaron Nicely told Task & Purpose.

While the system was designed to serve as an explosive ordnance disposal bomb bot, it can also be mounted on other platforms to function in a range of roles — think manufacturing and healthcare — so long as power and an ethernet cable are available. And unlike some legacy EOD robots, which are usually manipulated through the toggles and switches of a military-grade Xbox controller, the HDMS has a highly intuitive control system, which enables the user to manipulate objects with a great deal of finesse, from stacking blocks, to unwrapping a peppermint:

The Highly Dexterous Manipulation System from RE2 Robotics shows off by unwrapping a peppermint candy at the Office of Naval Research Tech Expo in Washington, D.C. on July 20.Task & Purpose photo by James Clark

But the HDMS wasn’t the only advanced bomb bot at the ONR expo, nor was it the only robot to set a high bar for coordination and graceful movement. The new arms for the Advanced EOD Robotic System look like they were ripped straight from Star Wars.

The Advanced EOD Robotic System, developed by the Johns Hopkins Applied Physics Laboratory, offers an incredible degree of control for EOD techs and was on display at the Office of Naval Research Tech Expo in Washington, D.C., on July 20.Task & Purpose photo by James Clark

Developed by the Johns Hopkins Applied Physics Laboratory, the skeletal arms allow for a full range of motion, and an extremely fine level of control, which makes it a great fit for deadly operations EOD where precision is key, Geoffrey Osier of Johns Hopkins, told Task & Purpose.

The AEODRS is an open-architecture system, which means it can be easily upgraded with custom software and other emerging technologies as they become available. The system can also function autonomously, observe, and then contextualize data. At the expo, as attendants walked past the booth, an AEODRS video camera promptly identified them as “people” on a nearby monitor

The value of this, Osier explained, is that instead of just recording a massive amount of data and dumping it into a tech’s lap, the system determines what it’s seeing and identifies patterns, which allows a user to note changes in that environment — say, if a car or crate, or some other object appears or disappears. The ability to track such minor changes in a place where troops are operating could mean getting a heads up that something is awry.

The HDMS and AEODRS are both impressive examples of how EOD robots come in recent years, but don’t worry too much about their breathtaking sophistication. They’re not self aware — yet.