I first met Marine Gen. James Mattis in the summer of 2000 when he took command of the 1st Marine... 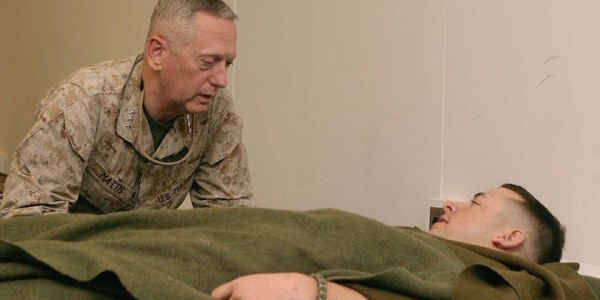 I first met Marine Gen. James Mattis in the summer of 2000 when he took command of the 1st Marine Expeditionary Brigade. After his change of command ceremony, I introduced myself as his new public affairs officer. “PAO, huh?” Mattis said. “What, are you going to follow me around all day and make sure I don’t say ‘fuck?’”

I had served as an infantry officer in a battalion in his former regiment, 7th Marines, so I said, “General, I was a platoon commander with 2/7. Treat me like just another gun-hand around the ranch.” Mattis then smiled, laughed, patted me on the shoulder and said, “I think you and me are going to get along just fine.”

From the start, it became evident that Mattis was of a different kind altogether. Instead of micromanaging, he fired those who were incapable or lazy, and empowered his staff to make decisions and carry out his intent. When Marines failed by omission, he helped them learn. When people failed by commission, they disappeared. Morale soared under his command and we truly believed we were unstoppable.

First and foremost, Mattis is a thinker. He made being smart cool in a tribe that is notoriously anti-intellectual. He is the most well-read person I’ve ever met. We heard he didn’t own a television and owned more than 6,000 books.

Related: For Some Reason, Mattis Likes To Wear His Flak Jacket Backward »

His recall is amazing. Were you to ask him what leader most inspired him, you might get a short lesson about the Sioux warrior chiefs, or his thoughts on Marcus Aurelius. This is why the “Mad Dog” sobriquet just doesn’t fit. I’ve never seen him lose his cool. Mattis often reminded us that, “everyone needs a coach, but nobody needs a tyrant.” Sure, he could get Marines fired up, but I’ve never seen him yell or scream. Ever.

Mattis assumed command of 1st Marine Division in the summer of 2002. He immediately brought the division staff together so that we might better understand his intent and leadership style. What follows are 15 of the key ideas he expressed during that initial session. You can find his staff guidance embedded at the bottom of this article.

1. “All of us are MAGTF (Marine Air Ground Task Force) leaders.”

Mattis was unconcerned with a Marine’s MOS. He only cared about how smart you were, how tough you were, and whether you’d “stick around and fight when the chips were down.” He expected all Marines to lead at their respective levels and fully recognized the team aspect and interdependence of all members of the division.

Mattis said that a leader’s job is to win the hearts of those they lead and remember that it is the subordinates who actually accomplish every mission. Done right, Marines will charge forward and fight with a happy heart. He said, “We must remember that we only need to win one battle: for the hearts and minds of our subordinates. They will win all the rest at the risk and cost of their lives.”

3. “Everyone fills sandbags in this outfit.”

In other words, rank has no privileges when there is work to be done and too few hands. Everyone was expected to roll up their sleeves and pitch in to accomplish the mission. Officers were not exempt and were expected to lead by example to help the team when needed.

Mattis believed in compassionate leadership and intrusive coaching. He also believed in tempering zeal so that, leaders “don’t allow their passion for excellence to destroy their compassion for subordinates.”

5. “There are only two types of people on the battlefield: hunters and the hunted.”

It was clear which he wanted us to be, and he encouraged us to inculcate a “hunter/ambush” mindset within the division. He told us that we were there to lead and reinforce his strengths, and to shore up his weaknesses. He hated brittleness in any form, and knew that any idea that could not withstand challenge would fail in the face of the enemy.

6. He encouraged simplicity in planning, and speed, surprise, and security in execution.

Mattis knew control in combat is an illusion — a ghost fools often chased. He preferred “command and feedback,” not command and control.

7. “The two qualities I look for most in my Marines are initiative and aggressiveness.”

8. “Remember, Orville Wright flew an airplane without a pilot’s license.”

He encouraged Marines to embrace new challenges. He knew the fog of war is both ubiquitous and relentless and that if you wait for perfect information, you will become paralyzed and irrelevant.

The Roman general Lucius Cornelius Sulla once remarked, “No friend ever served me and no enemy ever wronged me whom I have not repaid in full.” When he became division commander, Mattis made his version of Sulla’s epitaph the 1st Marine Division motto. He told us Iraq has a population of 33 million people, and we sure as hell didn’t want to fight all of them. We only wanted to fight the ones that were working to keep Saddam Hussein in power. He told his Marines that if the Iraqi people we encountered wanted to help us, or just stand aside, they would find no better friend than a U.S. Marine. If any opposed us, they would rue the day. He sought to limit damage and loss of life whenever possible.

Mattis told us that if you aren’t in combat, you should be preparing your Marines and sailors to go to combat. This is the sole purpose of the Marine Corps — to support our Constitution and defend the American people. He told us of another Roman, Publius Flavius Vegetius Renatus, who said, “If you want peace, prepare for war.”

Mattis knew that most people generally perform to the level of expectation that their leaders set. If a leader demands excellence and provides realistic and challenging training for their people, the people will respond. This was a moral imperative for Mattis, who often remarked that combat is unforgiving and the price of bad leadership is the butcher’s bill with the names of young Americans that comes with every war.

12. “I have been accused of making my subordinates my equals, and I happily stand guilty.”

Mattis has always been more interested in the six inches between a Marine’s ears than the rank on his or her collar. I frequently saw him go out of his way to empower talented people to do what they do best. His lead intelligence analyst in his command post during the initial invasion of Iraq was a Marine lance corporal savant who knew the Iraqi order of battle better than anyone in the division.

Mattis knew that the invasion of Iraq was going to be a major historic event, and 1st Marines would embed more than 100 reporters. He expressed a healthy respect for the role journalists play in our democracy and believed the press was “an entirely winnable constituency.” He knew that journalists would be the ones telling the American people about what his Marines were doing in combat, and he encouraged his Marines to “share their courage with the world.” When planning the embed program, Mattis told me to focus my efforts on telling the division’s story where the fighting and dying would take place — at the lance corporal and lieutenant level. He then quoted the Greek poet Pindar who said, “Left unsung, the noblest deed will die.”

14. “Engage your brain before you engage your trigger.”

Mattis would often tell Marines that taking the life of another human being is a significant act — one that they must be prepared to do as military professionals, but that they must think before they shoot. He said that killing the wrong people on the battlefield would drive more people to the enemy’s cause, and that such mistakes haunt people for the rest of their lives.

Lastly, my favorite of the things he told us:

15. “The number-one authority you have as a leader is your moral authority and your number one power is expectation.”

Mattis knew that Marines expect to see their leaders at the front sharing hardship and danger. He also knew that when leaders at the front expect Marines to move forward against the enemy, they will. A leader’s example and moral authority are what truly take a unit forward. He said, “In two minutes at the front edge of the combat zone, you know if the troops feel confident, if the battle is going the way they want it to, or if they need something. You can sense it, and you can apply something.”

Your browser cannot view this PDF. You can click here to download and read the Commanding General's Staff Guidance Document.