How do you know your bachelor party has been a success? Most of us would point to the mountainous pyramid... 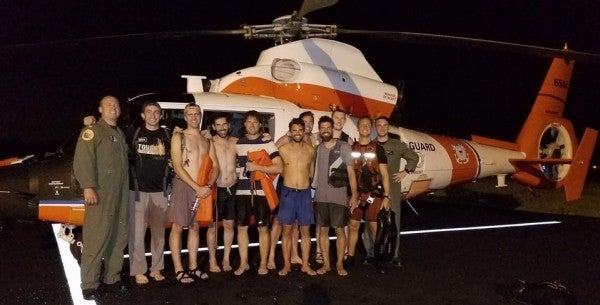 How do you know your bachelor party has been a success? Most of us would point to the mountainous pyramid of tumblers, bottles, and beer cans on the hotel counter, or the acrid cloud of cigar smoke, stripper perfume, and booze fumes wafting off your body like some kind of shame-infused exhaust.

But for one enterprising group of bros, a successful last hurrah meant partying so hard they ran their boat aground and ultimately had to be airlifted to safety and rescued by the Coast Guard, USA Today reported.

A little after 2:30 a.m. on Aug. 19, Coast Guard officials received a call that a 21-foot party boat had run aground on a sandbar near Capers Island, South Carolina, and its eight passengers were in need of help — and we’re just guessing here, but probably some coffee and Advil.

The Coast Guard, ever ready to save foolhardy yahoos from impending doom, dispatched a helicopter from Air Station Savannah, Georgia, and arrived about an hour later to hoist the marooned men to safety in two groups of four. Though likely a little damp and probably more sober than they wanted to be by that time, “all boaters were reported to be in good condition,” the Coast Guard said in a statement.

official Facebook page, with a fittingly glib account of the affair, and some deserving praise for the coast guardsmen who intervened:

All in all, it doesn’t sound like that bad of a bachelor party and probably a good opening scene if The Hangover 4 ever gets made.