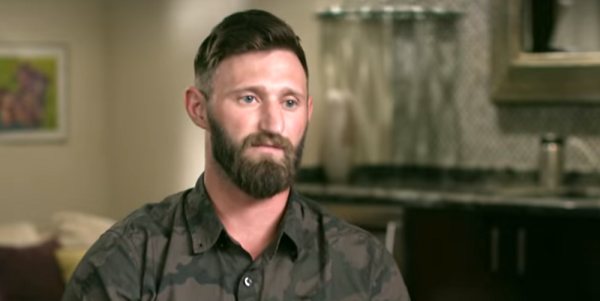 A day after the Las Vegas Route 91 Harvest festival mass shooting, the deadliest in United States history, Taylor Winston — a Marine veteran who commandeered a pickup truck to ferry the wounded to safety — returned the keys to the ad hoc ambulance’s owner.

According to the San Diego Union-Tribune, the two met on Oct. 2 after the truck’s owner, Phelps Amelsberg, took to social media asking for help locating his keys. In the wake of Winston’s rescue efforts, the truck was left abandoned and subsequently towed.

Amelsberg posted his initial text conversation with Winston on Facebook Oct. 2, adding, “Thanks everyone I found the keys and is the story I got with it.” Here is that chat:

Winston, a 29-year-old Iraq war veteran, and a friend, Jenn Lewis, were standing near the stage when the shooting began Sunday evening. As the pair sprinted for cover, Winston saw a row of trucks and hatched a plan.

“I tested my luck to see if any of them had keys in it, first one we tried opening had keys sitting right there,” Winston told CBS.

Related: This Marine Vet Stole A Truck And Turned It Into An Ambulance To Rescue Victims During Las Vegas Shooting »

From there, Winston and Lewis began collecting the wounded, and loading them into the back seats and bed of the truck before racing to Desert Springs Medical Center.

“People needed to get out of there, and we tried the best we could to get as many as could,” Winston told the Daily Beast said. “Some were in critical condition. We took a full load to the hospital and then came back for more.”

Over the course of two round-trips, Winston and Lewis ferried as many as two dozen wounded festival-goers to the hospital. By the third run, first responders had arrived on scene.

Amelsberg’s text conversation with Winston to recover the truck’s keys had 1,500 Facebook likes by Thursday morning, and hundreds of happy commenters.

“Sir, I don't know you, but I know your truck likely saved someone's life,” one commenter, Carol Apple, wrote to Amelsberg. “I will gladly start a gofundme to pay for new upholstery and new keys just for your selfless and caring response.”

“No don't worry about it at all,” Amelsberg responded. “I don't need no help as long as it did a good job.”