The victims of America’s worst mass shooting in modern history came from all walks of life — and so did... 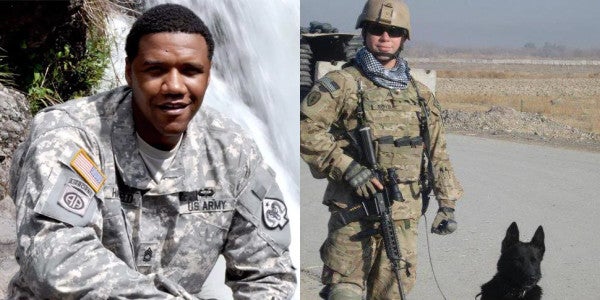 The victims of America’s worst mass shooting in modern history came from all walks of life — and so did the heroes who were praised for preventing further loss of life. They were nurses, special-ed teachers, lawyers, and small-business owners. And some were veterans of the military services.

“All branches have reported back to us that there have been no active-duty service members killed or wounded in the Las Vegas tragedy Sunday night,” Army Maj. Dave Eastburn, a Pentagon spokesman, told Task & Purpose on Oct. 3.

But, Eastburn added, more casualties were possible once unit accountabilities were taken: “The Nevada National Guard and Reserve Units are currently doing recalls to collect that information, but because the majority of the troops in Las Vegas are part-time guardsmen, it will take significantly longer than the active force.”

Here is what we know about the veterans killed in the Las Vegas tragedy, as well as those vets who rendered assistance to their fellow concertgoers. Task & Purpose will update with more information as it becomes available.

Hartfield, 34, was an off-duty Las Vegas police officer and youth football coach known to many as “ChuckyHart.” Earlier in the summer, he wrote and published Memoirs of a Public Servant, a 208-page account of his policing career.

But he was also a 16-year military veteran. A 2013 Nevada National Guard newsletter identified Hartfield as a sergeant 1st class assigned as staff to the Guard’s 421st Regional Training Institute, after serving with the 82d Airborne Division. He also was a heavyweight co-champion in the Nevada Guard’s first internal combatives tournament, in 2012.

“I don’t know a better man than Charles,” longtime friend Troy Rhett told the Las Vegas Review-Journal. They say it’s always the good ones we lose early. There’s no truer statement than that with Charles. … Our hearts have just been very heavy since hearing the news.”

Hartfield, who leaves behind a wife, a son, and a daughter, asked friend Walter Lowell to take a photo of him in his Army ACUs during a 2015 trip to Hawaii, saying, “I don't have any good photos of me in uniform,” according to Lowell. His friend posted that photo, shown above, on social media as a tribute to Hartfield.

“There’s really no solace to this other than we know Charles, and he was probably doing his best to make sure others were safe and being helped,” Rhett told the Review-Journal. “He was just so special. He’s going to definitely be missed by many.”

Roybal, a veteran of the Navy from Corona, California, was a master-at-arms who deployed as an individual augmentee with the 25th Infantry Division in Afghanistan. Last July, Roybal published a post on Facebook answering the old question combat vets are so often asked: What’s it like to be shot at?

“As the fights continue and as they as increase in numbers and violence, that excitement fades and the anger is all that’s left,” Roybal wrote. “The anger stays, long after your friends have died, the lives you’ve taken are buried and your boots are placed neatly in a box in some storage unit. Still covered in the dirt you’ve refused to wash off for fear of forgetting the most raw emotions you as a human being will ever feel again.”

Roybal was in Las Vegas last weekend to celebrate his 29th birthday with mom Debby Allen, 49, she said in an interview with the New York Daily News. They had relaxed poolside Sunday afternoon and planned to meet at the music festival later that night. But when the shooting began, Allen was pulled out of the field of fire by fellow concertgoers before she could find Roybal.

A first responder later told Allen’s daughter that he had tried to save Roybal’s life after he was hit in the hail of small arms fire. “He said he rendered first aid but saw the life go out of my son. I wouldn't believe it, but I got confirmation today. The coroner told me. It sounds like he got shot pretty quickly,” Allen told the Daily News. “I feel like I'm living in a nightmare, I want to wake up so badly.”

Related: ‘No Way To Really Protect Yourself’: Veterans Describe The Horror Of The Las Vegas Shooting »

Other veterans survived the onslaught and witnessed — or committed — acts of bravery while the gunfire persisted.

Taylor Winston, 29, a Marine veteran of the Iraq war, stole a truck at the concert grounds to ferry as many as two dozen critically wounded bystanders to a local hospital in multiple trips. “We went back into the gunfire and started looking for priority victims, people with the most serious injuries, to get to the hospital,” he said in an interview with ABC 10 News. You can read his full story here.

Robert Ledbetter, 42, a former Army Ranger and scout sniper, shoved his wife under cover and set out to find the shooter. Instead, he found wounded fellow concertgoers, fashioning a tourniquet for one man who was legshot out of a bystander’s flannel shirt, he told the Los Angeles Times. As he and his family fled the scene, they picked up his brother, who was shot through the arm and chest, and ferried him to first responders. But Ledbetter denied his actions were heroic. “I’m a retired vet. There were five surrounding me that were combat medics doing the same thing I was doing,” he told the Times. “Army veterans helping other veterans, helping people out.”

Colin Donahue, an Iraq veteran and Army reservist, spent much of the assault pulling people out of the line of fire, he told Fox News. “I just did what I was supposed to do and what I was trained to do, and I was trying to take care of people,” he said.

When an anchor asked if he'd ever seen a firefight like the one that unfolded in Las Vegas that night, Donahue replied, “No sir. We had a little, we had a little bit up towards Mosul, but nothing… nothing comparatively. That was the worst thing… words can’t describe what was going on at the time. And there was nothing I could do.”

For more on veterans who witnessed the Las Vegas attacks and helped with the response, read Task & Purpose’s full story here, and watch this post for updates.