This Soldier Claimed He Saved An Injured Motorist With A Ballpoint Pen. Well, That’s Probably B.S.

On January 9th, Army public affairs officials recounted the heroic actions of Sgt. Trey Troney, who purportedly saved an injured motorist with a sweatshirt and pen. That story was probably bullshit 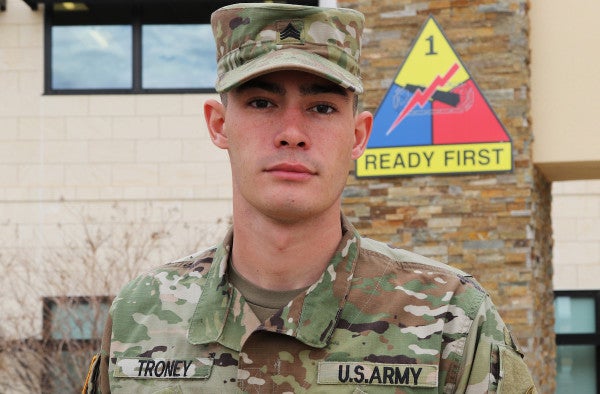 It's a familiar tale of service to American society far beyond the U.S. armed forces. A soldier encounters a traffic accident while traveling home and immediately rushes to aid a driver trapped in his vehicle and, after freeing him, saves his life with nothing more than a hoodie, a pen, and the training he received from his unit's medics. It's the stuff that Army recruiting commercials are made of.

Except there's one problem: It's most likely bullshit.

Seeing Jeff Udger, of Longview, Texas, slumped over the steering wheel of his truck, Troney asked two other men to help him pry open the door. Udger had a bad gash on his head, and Troney took off his brand new “Salute to Service” New Orleans Saints hoodie and wrapped it around Udger's head to help stop the bleeding.

At this point, Udger was still conscious enough to make a joke about it, Troney said.

“Well, this is Cowboy country, so I don't know how I feel about you wrapping me up in a Saints hoodie,” Udger told Troney.

Soon after, however, Troney noticed that the left side of Udger's chest wasn't moving, and he realized Udger had a collapsed lung. Troney ran back to his Jeep, hoping he still had some first aid supplies left from the brigade's recent rotation at the National Training Center in Fort Irwin, California. Sure enough, he had a Needle Chest Compression, or NCD, and an Individual First Aid Kit, or IFAK, so he grabbed them and ran back to Udger.

While his training made the use of the NCD second nature for Troney, he had to think fast after the NCD needle was too small to reach into Udger's collapsed lung and relieve pressure.

Finding a ballpoint pen, he had an idea. He tore off the ends of the pen and took out the ink so it was just a hollow tube.

“I took the NCD and put it right in the hole and kind of wiggled (the pen) in with my hand in between the ribs and you just started to see the bubbles come out of the tip, and I was like, 'OK, we're good,'” said Troney.

The state trooper who had just arrived asked, “Did you just put an ink pen between his ribs?”

“I was like, 'I did,'” Troney said. “And was like, 'he's on no pain meds,' and I said, 'oh, he felt it, but he's unconscious. He lost consciousness as I was running back to my Jeep because he had lost a lot of blood.'”

Even though the story was recounted by every media outlet from Fox News to Army Times, Fort Bliss officials retracted the story on Thursday after several readers, including the vibrant U.S. Army WTF! Moments community, questioned the details of the incident. Sweetwater's own fire chief Grant Madden told Army Times that the injuries and first aid described by Troney didn't even match those of the alleged victim.

“I was at that wreck,” Madden told Army Times. “I removed the man from the wreck.”

According to Army Times, Troney's command has initiated an investigation to determine “whether he lied to his leadership about his role in the accident” prior to the public affairs shop's touting his heroism from the mountaintops.

“The entire 1st Armored Division and Fort Bliss team sincerely apologize to the Texas Department of Public Safety, Texas Highway Patrol, the city of Sweetwater, Texas, the city of El Paso, the University of Texas at El Paso, the New Orleans Saints, the local and national media and the American people,” spokeswoman Maj. Allie Payne said in a statement.

Now, we can't fully blame media outlets for picking up what the Army claimed was a solid story. But here's a word of advice to public affairs officials: If a story is too good to be true, it probably is — no matter how badly you want to showcase the capabilities of your soldiers.

WATCH NEXT: The Call Of Booty