Russia accused Ukraine of carrying out the attack, with British support. 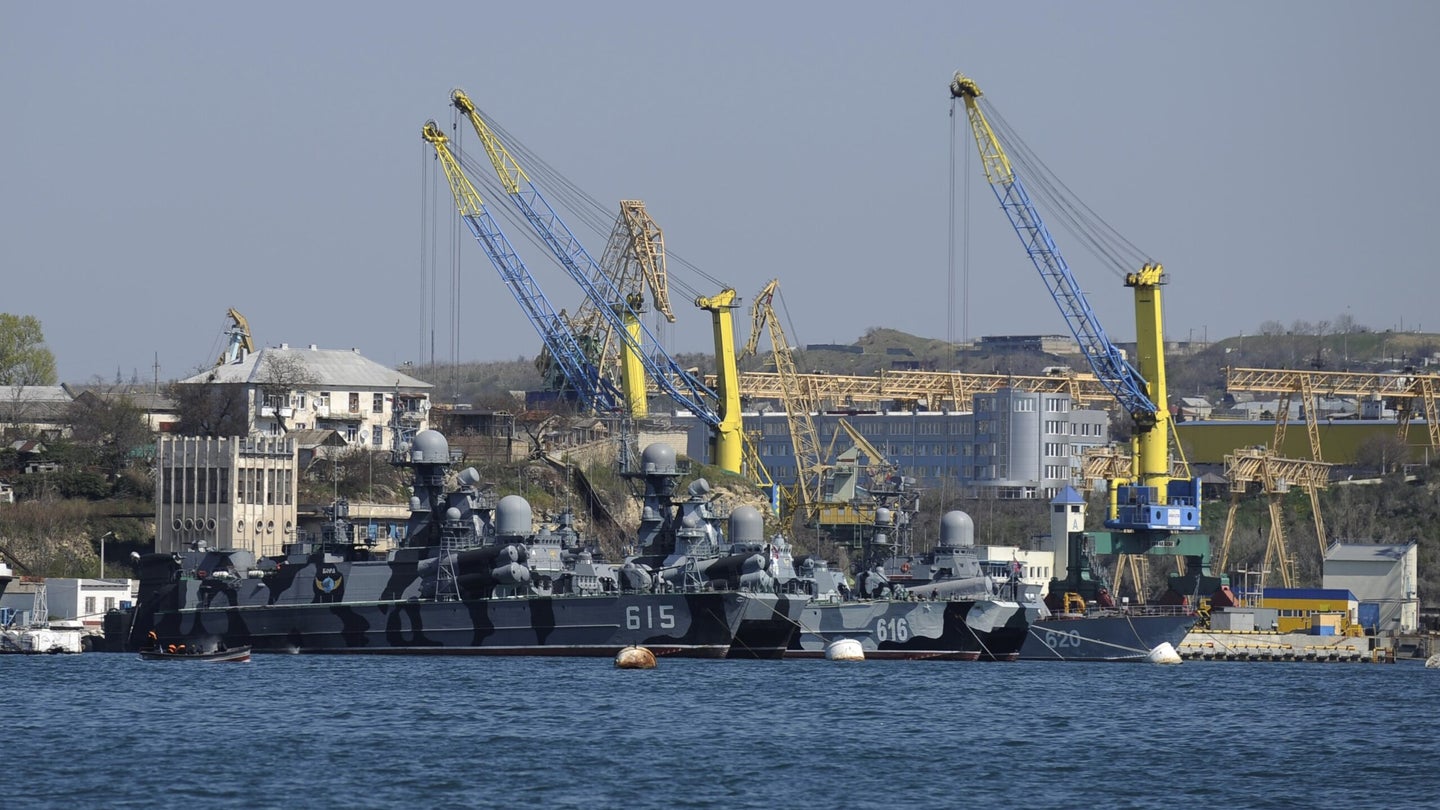 Russian warships anchored at the Crimean port of  Sevastopol were targeted by a swarm of armed drone aircraft and boats early Saturday morning. Russia accused Ukraine of sending the drones, but Kyiv has not claimed responsibility for the strike.

The coordinated attack, which mixed both armed aerial drones and uncrewed surface vessels loaded with explosives, damaged at least one Russian ship at the strategically important port, which is home to the Russian navy’s Black Seat Fleet, according to the Russian Ministry of Defense.

The sudden early morning attack saw the drones swarm in on the Russian ships, attacking from multiple vectors. The multi-pronged drone assault used at least nine aerial drones and seven drone boats, all loaded with explosives, the Russian Ministry of Defense said, according to the Russian news organization TASS.

“All air targets were destroyed,” the statement said.

Footage that surfaced on social media Saturday morning appears to show the attack from the perspective of the drone boats as they skim along the water, in some cases taking fire from Russian helicopters as they swiftly move toward their targets.

Footage of the attack was captured by the drones and CCTV cameras in the harbor.

It’s unclear exactly how much damage was dealt to Russian ships at Sevastopol, but multiple vessels were in the port at the time of the attack. According to the Russian MoD, at least one vessel sustained ‘minor’ damage.

The water-borne drones themselves appear to be a same kind of watercraft as the mysterious single-engine boat that was previously spotted near the city In September, which our colleagues at The War Zone reported was likely a “suicide drone” loaded with explosives and meant to detonate on impact.

Russia also accused British “specialists” of helping coordinate the attack but did not offer any evidence. The British government denied any involvement, accusing the Russian government of “peddling false claims of an epic scale.”

The drone swarm constituted the “most massive attack by UAVs and remote-controlled surface drones in the waters of the Sevastopol Bay in the history [of the special military operation],” the governor of Sevastopol, Mikhail Razvozhaev, said in a statement to TASS.

As a result of the attack, Russia announced it was pulling out of the agreement to allow Ukrainian grain exports transit  through the Black Sea. That United Nations-brokered deal was set up in July and is meant to help get the much-needed grain out to stop famine in North Africa and other regions.

Ukrainian Foreign Minister Dmytro Kuleba accused Russia of using a “false pretext” to back out of the deal.

Saturday’s attack is not the first time Ukraine targeted Russian warships and the navy. In April, a cruise missile sank the cruiser Moskva, two months after Ukranian soldiers on Snake Island in the Black Sea told its crew “go fuck yourself.” On July 31, a Ukrainian drone strike hit the Black Sea Fleet’s headquarters in Sevastopol, injuring five.

Ukraine has carried  out a series of attacks in recent weeks inside Russian-controlled territory, targeting key infrastructure and military targets. Earlier this month a strike damaged the bridge linking Crimea to Russia, killing three people.