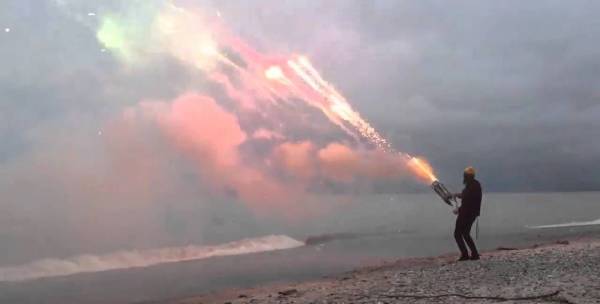 Fireworks, like any mass-market pyrotechnics, come with the twin possibilities of extreme fun and extreme injury. In 2016, nearly 12,000 Americans were rushed to hospitals with fireworks-related injuries; a full third of those were to the fingers and hands. And of the approximately 15,600 fires started by fireworks annually each year in the U.S., more than a quarter occur over the Independence Day holiday, according to government data.

Why do we indulge in this dangerous ritual every year? Simple: It’s fucking awesome. Playing with fire is as old as human civilization, and finding new ways to make giant explosions at the risk of serious bodily harm is as American a past time as baseball and apple pie. And there’s no better example of this than the recent emergence of the DIY firework ‘minigun,’ the apex of American ingenuity and stupidity.

Though not technically a minigun due to the noticeable absence of six rotating barrels, firing off more than 1000 fireworks in 45 seconds ain’t half bad. Luckily, this video was shot in January 2016, and the folks featured spent the next year improving their design:

“I apologize for the swearing at the end but I nearly lost a finger when the mortar was launched,” the uploader writes. “Please do not ever attempt anything similar to this.” Agreed on both counts, but we’ll still be toasting your pyrotechnic badassery come this holiday weekend — from a safe distance, of course.