It's kind of like taking a hygienic scrub down memory lane, with the added benefit that you're not sharing a shower with 50 sweaty, stinky, and dirty recruits. 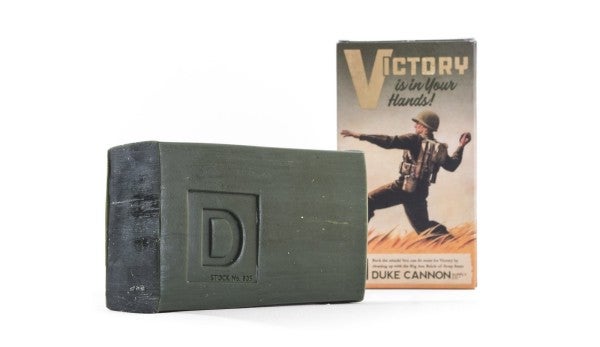 I'll be honest, I was a bit taken aback when I got a bigass bar of soap as a Christmas gift — okay, okay, I get the hint — but after opening the gung-ho package of Victory from Duke Cannon and giving it a whiff, I was transported back in time to boot camp.

Fortunately for me, and anyone with a nose, the soap doesn't literally smell like recruit training. No one wants the aroma of fear, frustration, and confusion around them. Rather, it's strikingly similar to the the soap I remember using at Recruit Depot San Diego. It's kind of like taking a hygienic scrub down memory lane, with the added benefit that you're not sharing a shower with 50 or so sweaty, stinky, and dirty recruits.

Designed for “hard working men who want to get clean and smell good without using shower gels and accessories,” Duke Cannon models its soap after those issued to American troops during the Korean War. According to the company's website, they make their soap at the same family-owned plant that supplied the United States military during that era, and a portion of their proceeds go back to veterans' charities.

The olive drab brick doesn't really have an aroma beyond clean, that and a faint earthy smell. The package says it's grass, but it really just smells like outside. In any case, I prefer it to the pungent odor of sleazy desperation you get from other men's body washes and soap.

At $9 the cost isn't too steep, but it's also the size of three normal bars of soap gorilla taped together, so if you're like me — which is to say outrageously cheap — then this might be a cost effective way to clean that nasty body of yours.

Though don't expect to travel with this thing, at 10 ounces it won't fit in a soap container.

WATCH NEXT: The Speedbox Is The Most Durable Container We've Ever Seen