The new Call of Duty: WWII gameplay and cinematic trailer just dropped and it’s everything fans have been waiting for.... 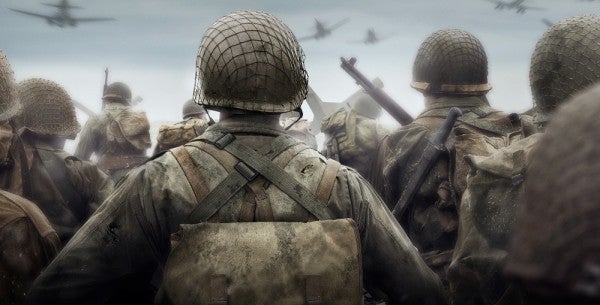 The new Call of Duty: WWII gameplay and cinematic trailer just dropped and it’s everything fans have been waiting for. After a string of science fiction-themed first-person shooters, game developer Activision has taken the franchise back to where it all began: World War II.

You know what that means: Get ready to step into the boots of a paratrooper with the 101st Airborne behind enemy lines; or hit the beaches on D-Day; and trek across Europe as a badass Tommy Gun-toting grunt.

In the new trailer, which dropped on June 12, CoD fans get a brief taste of the beloved franchise’s upcoming 14th installment and it’s a fast-paced nostalgic slugfest. In the new video, soldiers stalk through trenches with flamethrowers as grenades sail through the air, and ordnance from low-flying dive bombers explode across the battlefield. Based on the trailer, it’s pretty much Saving Private Ryan and HBO’s Band of Brothers franchise, but in first person — “Currahee!”

Through a mix of cinematics and in-game footage the trailer hints at what you can expect in terms of gameplay mechanics — some of which will be familiar to fans of Battlefield 1. You can run and gun before whipping out your entrenching tool to dispatch your foes, or just fix a bayonet and go charging into enemy ranks. Weapon attachments, a core part of the franchise’s allure, are likely to feature prominently, made apparent when a cami-net helmet clad soldier affixes a suppressor to his burp gun and mows down a line of Nazis.

The game will hit consoles and PCs on Nov. 3 and feature a full-length campaign, which will span the European theater of war. There’s also going to be a zombie survival mode, which means — yes, more Nazi zombies to beat to a bloody pulp — and of course: Multiplayer.

So, who else is ready to join the ranks of the greatest generation and head off to a hellish simulated warzone? Yeah, that’s what we thought.