Activision's first-person-shooter franchise returned to its roots Nov. 3 with the newest title in its marquee series, Call of Duty:... 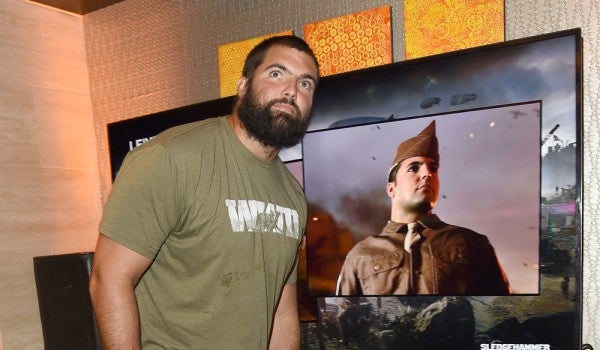 Activision's first-person-shooter franchise returned to its roots Nov. 3 with the newest title in its marquee series, Call of Duty: WWII. And as happened with the launch of the first dozen or so COD installments since 2003, this first-person shooter will have a real impact on the U.S. military: In barracks and rec rooms on bases across the globe, internet speeds will grind to a (slower) crawl as squad after squad of junior troops log onto crummy wifi, locked and loaded with M1 Garands and Thompsons, to hit the beaches of Normandy in high def.

The first-person shooter bragging-rights tourney is a longstanding tradition for many Marines, soldiers, airmen and sailors — including Army Ranger-turned-Pittsburgh Steelers star Alejandro Villanueva, who took time during a PR blitz for Call of Duty: WWII on Oct. 31 to talk with Task & Purpose about gaming culture in the military, as well as the use and abuse of vets in pop culture and politics.

When his unit was overseas, off-duty, and on a real COD jag, “We actually made our privates hold cardboard near the big flat screen TV so that we wouldn’t screenwatch each other and find each other on the map,” Villanueva — a 29-year-old former Army officer with three tours in Afghanistan and a Bronze Star with “V” — told Task & Purpose. “I don’t think there was one game that was more popular than the Call of Duty series when it comes to people in the military.”

Villanueva’s enthusiasm is not just a fan’s talk. The NFL tackle and teammate Le’Veon Bell appear as characters in Headquarters, a new garrison-style “dynamic social hub” for Call of Duty players to mill about between matches and hit up the shooting range, where a stern-looking Villanueva is there to give pointers.

In that shooting spirit, we asked him a couple of bang-bang questions; here’s what he had to tell us:

Gaming is a superior deployment distraction.

“Just like how people sometimes want to see accidents on Youtube — they want to see what it’s like for a soldier to fail in society, because of all the stuff that he’s gone through. So I think that with that, there’s a lot of negative consequences.”

Soldiering is a job.

“To some degree, people need to chill. It’s not that dramatic, it’s not that crazy. It’s a very honorable job, honestly, but it’s not like every five minutes there’s sniper fire and piano music in the background.”

Vets aren’t all heroes or villains or victims. They’re people.

“People need to be careful — I think they need to be responsible coming out with these movies about veterans, they’re sort of using them as things to point at or kind of, you know, say ‘Stay away from them’ or ‘Feel bad for them.’ And that’s not the case at all.”

You are not your political opinions.

“When I was deployed, one of the crazy things that was going around — I don’t know if it was right or wrong — but people said, ‘You don’t have to vote; you shouldn’t vote.’ Regardless of who comes out of as commander in chief, your job is to follow orders, and your job is to be the best officer or enlisted you can ever be. That’s how I try to approach it. I’ve tried to stay out of politics in everything I’ve done in my life.”

If politics are your thing, okay. But be smart about it.

“For one, I don’t understand politics, and two, they’re paying me and they’re telling me lawful orders I have to do regardless of how I feel, and three, to me, you’re involved in something so large it can take up all your time — you could be focusing on the wrong things.”

No Steelers were on the sideline during the anthem.

LT Alejandro Villanueva, a veteran who served in the Army, stood near the tunnel. pic.twitter.com/JOviLUAtiF

The whole National Anthem/police protest/NFL/veterans thing is out of hand.

“Unfortunately, now that I’m in the NFL, they have to deal with that, and it f—ing sucks that it’s led to this awful political sort of thing… [Veterans don’t] need to be that dramatized, as our political views are, or what we think of the National Anthem.”

Gaming can help unify a divided nation (or wardroom).

“I think it’s much simpler for veterans, if you go back to things like playing Call of Duty because it brings a smile to people’s faces.”