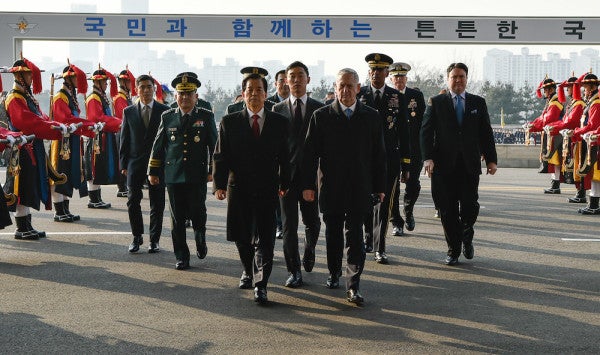 “America's commitments to defending our allies and to upholding our extended deterrence guarantees remain ironclad: Any attack on the United States, or our allies, will be defeated, and any use of nuclear weapons would be met with a response that would be effective and overwhelming,” he said.

The United States pledged to provide protection to South Korea, since the Korean War ended in 1953 with an armistice agreement. The two Koreas are still technically at war, but South Korea has become one of the strongest U.S. allies.

“North Korea continues to launch missiles, develop its nuclear weapons program, and engage in threatening rhetoric and behavior,” Mattis said. “”We stand with our peace-loving Republic of Korea ally to maintain stability on the peninsula and in the region.”

His decision to make South Korea his first trip while serving as defense secretary was meant to reassure South Koreans of the longstanding U.S. commitment to its safety.