It’s been 24 years since Forrest Gump met Lt. Dan and got the same sage advice that so many fresh... 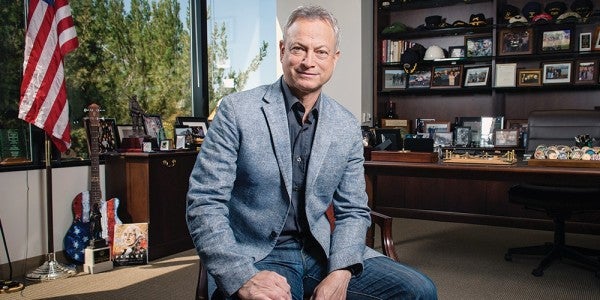 It’s been 24 years since Forrest Gump met Lt. Dan and got the same sage advice that so many fresh troops before and after have received from on high: “Change your socks.” In the years that followed his iconic role, Gary Sinise has become a well-known figure in the military and veteran communities, thanks to his advocacy on behalf of service members and their families.

On March 6, Sinise was honored at a Tragedy Assistance Program for Survivors (TAPS) gala in Washington for his work through the Gary Sinise Foundation, which since 2011 has built custom smart homes for severely wounded vets; hosted morale shows, many featuring the Lt. Dan Band, among others; run local events and cookouts for veterans and families of the fallen; and organized trips for veterans and students to visit the World War II museum in New Orleans.

Task & Purpose caught up with Sinise by phone to ask about his work, cutting through the white noise of the 24-hour news cycle to raise awareness about the costs of America’s longest war, and perceptions of post-9/11 service members and vets among civilians and mainstream media.

We also took a moment to ask some lighter questions, like his his go-to MRE: Sinise prefers that “pork thing” with the “fruit sauce” dessert. In other words, Pork Rib.

This interview has been edited for clarity and brevity.

Task & Purpose: Do you think enough is being done for post-9/11 veterans, service members and their families?

Sinise: I don’t think it’s ever enough, because there’s so many in need. And deserving veteran families out there… may never get the care they need because they don’t know where to turn, or they aren’t aware of these multiple services being provided to them. So awareness of where they can get those services, if they need them, is a critical piece.

That’s where I’ve felt I have a good role to play there, because I have a public platform. I can create awareness for where the needs are, and I can try to raise spirits, money, and awareness wherever possible.

There’s ongoing challenges within the military community, but certainly in retrospect there’s a lot more support than there ever has been.

TP: Is it challenging to cut through the white noise to get people to pay attention?

Sinise: It’s been a long war. There are a lot of people out there who have other issues that they’re focused on. I think generally, there’s a feeling within the general population, that “Well, at least saying I support veterans and military folks is a good thing. Even if I’m not actively doing anything to show that, at least I can say I support them.”

Now, there are other people who have decided to really manifest that into action — real serious action. There’s people who say “I’m not going to just say I’m supportive, I’m actually going to do something to express my support,” whether it’s by donating money to worthy charities, or starting their own worthy charity, or promoting programs, or getting involved in various ways. There are a lot of people out there who are doing that.

TP: How do you think veterans and the military at large, are perceived by the average American?

Sinise: There are probably going to be certain segments of the population that just don't understand what military folks do, or why they do it, or who they are, or how qualified they are — for example, that knucklehead teacher at that school out in California who decided to talk about our veterans in a very negative way, that they couldn’t get a job doing anything else, or that they’re the lowest of the low and all the stuff that he said. That is just pure foolishness and ignorance, and quite frankly, the guy just doesn’t know what he’s talking about.

Are there people like that out there? Yeah, there are unfortunately people that just really don’t get it. But on the other hand, I do think that generally, the majority of the population understands that our military folks deserve respect.

TP: You’ve done a number of USO tours and troop welfare shows and events over the years — do you have any sea stories from those trips?

Sinise: Oh gosh, well, yeah, I remember a funny moment when I was in Iraq in 2003. I was on a USO tour with Wayne Newton, Chris Isaak, Neal McCoy, and some Dallas Cowboys cheerleaders; Ollie North was on that tour.

And we were going around to different places, and we were in Balad, at Camp Anaconda, and were doing a little hospital visit. It was one of those tent hospitals; there’s operating rooms, and patient recovery rooms, and doctors and nurses walking around, and people going through recovery there.

And there was a room that had a little window in the door, and we looked in the window, and there was an operation going on. Turns out a doctor was operating on an Iraqi soldier. And Wayne Newton and I, we stuck our faces in this window of the door and we were looking in. The doctor had his back to us, and the nurse looked up and saw Wayne Newton and my face in the window. And she said “Doc, look!” and he turned around with his scalpel, and bloody gloves on, and just starts waving at us to come in.

So, here’s Wayne and I in the operating room, and the guy’s laying on the table, I think they were working on his arm or something, and it was straight out of M*A*S*H. It was hilarious. I said, “Don’t you need to get back to work here on this guy?” and he said, “Oh, he’s fine, he’s fine, let’s take a picture.” So we did.