Hey, did you know the AR-15 is really loud? That it shoots bullets meant to inflict maximum damage? Or that... 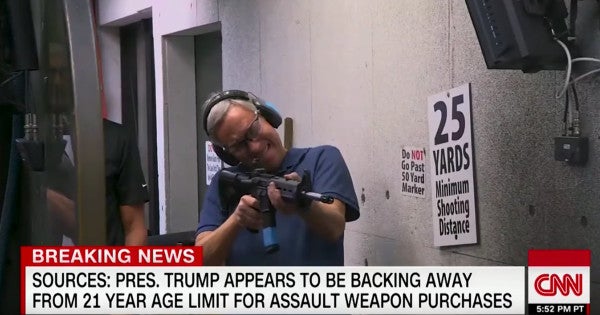 That it shoots bullets meant to inflict maximum damage?

Or that it looks a lot like the military's M-16 rifle?

If you didn't know all these amazing factoids, then you're in luck, because CNN has a two-minute video filled with all this and more, including reporter Gary Tuchman shooting the AR-15 in the same way I imagine it would be fired by an underperforming second-grader.

It's important to point out that right behind Tuchman is retired Army Lt. Gen. Mark Hertling, who could have helped the reporter a little bit more by telling him to place the weapon in his shoulder, put his cheek on the buttstock, or at a minimum, aim down the goddamn sight.

But of course, that would reduce the hilarity of this clip, so never mind.

It turns out that Hertling can fire the weapon properly, but he makes some questionable statements, like being able to fire the AR-15 on “full semi-automatic” — which is not a thing — and that its bullets are designed to inflict maximum damage, as opposed to every other freaking weapon in the world.

The clip is, of course, all part of an ongoing debate over guns in America in the wake of the school shooting in Parkland, Fla.

While reasonable people may support proposals such as background checks for every gun purchase and perhaps, raising the age requirement for getting an AR-15 from 18 to 21, a CNN report like this seems to only illustrate the news organization is a clown show when it comes to reporting on guns.

CNN isn't alone here. Back in 2016, New York Daily News reporter Gersh Kuntzman was widely mocked for his first-hand report on what it was like firing an AR-15, which he said felt “like a bazooka, and sounded like a cannon.”

You can watch the full CNN clip below, although I recommend putting on the Benny Hill theme music before pressing play.