How To Poop Under Fire, According To This Creepy WWII-Era Marine Corps Video

Combat is dirty business. So is pooping. And when the two collide during times of war, you can bet your... 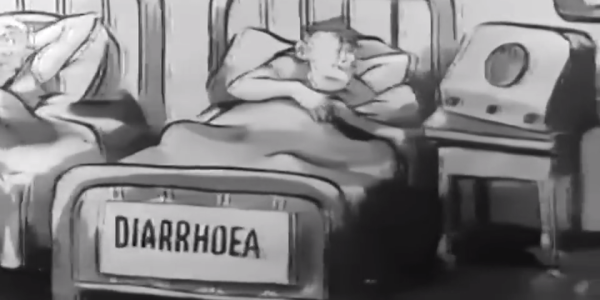 Combat is dirty business. So is pooping. And when the two collide during times of war, you can bet your ass that the U.S. is ready for shit to hit the fan.

Once you get over the Bugs Bunny-esque style of the five-minute black-and-white cartoon, the advice is pretty straightforward: “Avoid contaminating any area which could result in dysentery for your entire unit.” Also ill-advised: setting up “your own private one-holer” somewhere in the woods; that’s a definite dysentery don’t.

Unfortunately, this video was shot produced during the closing months of World War II, which means there are some unsavory (read: fucking racist) elements throughout. The smiles evaporate a minute into the video when that stupid dope Pvt. McGillicuddy is advised to “keep a lookout for a Jap when you go to take a crap.”

Yes, sure, this PSA was produced in a different era when xenophobia ran high; even Superman, himself an illegal immigrant, suggested Americans “slap a Jap” at one point. But it gets obscene towards the end when Japanese military commanders realize that “making a bowel movement in the wrong location” is a major U.S. strategic weakness.

Christ, history’s a bummer. Watch the full thing below: