A 59-year-old Army veteran arrested in a Massachusetts hotel with dozens of weapons claims that he assembled his arsenal as... 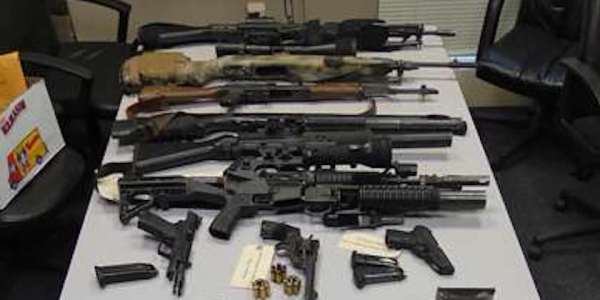 A 59-year-old Army veteran arrested in a Massachusetts hotel with dozens of weapons claims that he assembled his arsenal as part of a “classified” mission for an unnamed government agency, according to law enforcement.

Texas native Francho Bradley and partner Adrianne Jennings were arrested at the Marriott Residence Inn in Tewksbury, Mass., on March 24th with a massive assortment of firearms and military-style equipment. Bradley claimed he had transported the stockpile to Massachusetts from Texas “because he needed them with him for his mission,” according to a police report obtained by The Lowell Sun.

The cache recovered by local law enforcement included several semi-automatic rifles outfitted with suppressors and bump stocks; an AR-15 variant “with a grenade launcher affixed to the bottom”; tactical vests that appeared outfitted with military-style smoke and “flash bang” grenades; and high-capacity magazines, including several “affixed to each other by a homemade case … allows an individual to shoot off all five magazines in a short amount of time.”

When pressed by detectives about the stash of guns in his room, Francho responded that “he can’t tell us what he does for work or why he has all the guns with him, but that he is down in this area working for a government agency that is dealing with a virus,” according to the report.

Francho told police that had served as an EOD tech during his time in the military and currently works as a contractor Ensyme Engineering, which claims the Department of Energy and Centers for Disease Control as clients. He also made a number of bizarre claims regarding his public service, including a suspicious stint with the Los Angeles Police Department:

Despite their “classified” mission, neither Bradley or Jennings were carrying any military or police identification, nor did they have a license to carry “in any state,” according to the police report. “We always bring the guns with us in case he gets deployed,” Jennings told detectives.

Oddly, police initially responded to the Marriott when Bradley himself called the police — “to report he believed someone was trying to break into his room.” He “had a surveillance video feed of his hotel room in his car, and was concerned because the video feed died” during an excursion to Boston that day, according to The Lowell Sun.

When police arrived, he advised law enforcement of a handgun “hidden” in a drawer in his room because he “didn't want the gun to get into the wrong hands,” a disclosure which prompted the search that revealed his weapons cache.

But while the police report indicates that Bradley cooperated with law enforcement, Detective Patrick Connor came to suspect that Bradley was, in fact, planning a mass-casualty event at one of the gun control marches planned for the metro Boston area the following weekend:

Bradley currently faces more than 40 criminal charges and an investigation by state and federal law enforcement officials, according to the Lowell Sun. At his arraignment, Bradley’s attorney Robert Normandin claimed the assorted firearms were “props” used by Bradley as part of his consulting business.

Arrest Of Francho Bradley And Adrianne Jennings by Jared Keller