The Coast Guard is officially outta luck for a paycheck thanks to the government shutdown, which means that zero coasties have been paid to create some of the amazing memes being shared as a way to vent their frustration. 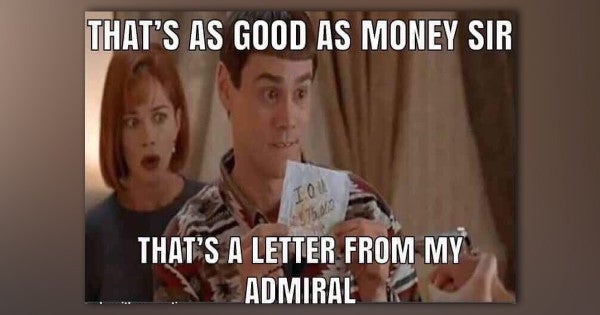 The Coast Guard is officially shit outta luck for a paycheck thanks to the government shutdown, which means that zero coasties have been paid to create some of the amazing memes being shared as a way to vent their frustration.

Often shared along with the hashtag #PayOurCoastGuard, the Facebook page Coast Guard Memes has been doing its part to lift the spirits of the Coast Guard's roughly 42,000 active duty members and about 8,000 civilians affected by the shutdown, among many others across the federal government.

Despite the lapse in CG funding — which comes from DHS instead of DoD, which is not affected by the shutdown — Coast Guardsman have been doing what they've been doing, rescuing fishermen, interdicting drug smugglers, and conducting patrols in the Arctic.

SEE ALSO: Coast Guard Commandant: I Know You Haven't Been Paid But 'Stay The Course'

Like this one, which makes it pretty clear that the bills don't stop when the paycheck doesn't come.

And no one in the Coast Guard really cares who is to blame… as long as they get paid again.

This is a not so subtle dig at the letter shared on Tuesday from the Coast Guard Commandant, who said he was working to fix the problem (though he doesn't have much power here) while asking his people to “stay the course” and “serve with pride.”

Although many of the Coast Guard memes are lighthearted and funny …

… Some offer less-than-stellar advice for getting by.

This is in reference to a memo released by the Coast Guard Support Center telling families that they might want to try holding garage sales, walking the neighbor's dogs, or becoming a mystery shopper to earn a little extra income. Not surprisingly, that letter was taken down after The Washington Post reported on it.

But clearly, there are plenty of Coast Guardsmen who are not happy right now.