The Coast Guard does so much the masses on your local beach don't see. 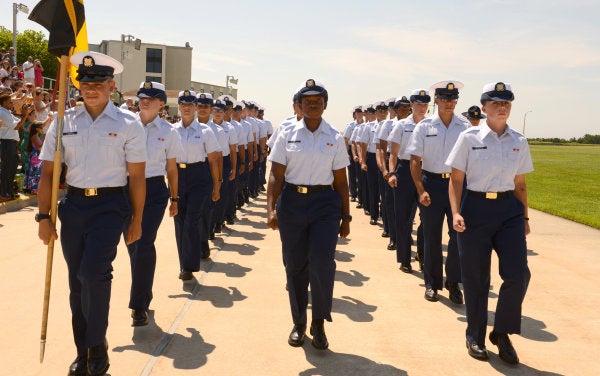 First you hear them. The dull roar of voices calling and repeating. Hundreds of rubber soles begin pounding the pavement of an empty Beach Avenue. It sounds like an oncoming train.

Then the recruits of United States Coast Guard Training Center Cape May are upon you.

Discipline is maintained as they run in neat rows. Their company commanders see to it; somehow, their individual voices bark louder than the collective roar of the recruits. You keep your ears open for any colorful tirades, but this isn't the place for that.

On they run. Step after idealistic step, teeth gritted, eyes fixed forward, sweat darkening grey cotton t-shirts — this isn't even the hardest part of their day. Yet they want to be here. Idealism can't be sweated out. Young men and women from all over the United States, gathered in the birthplace of the modern American beach vacation, grinding it out for a greater purpose.

Find a spot on the beach and you'll see the Coast Guard at work. A hulking C-130 will lumber by. Bright orange helos on patrol, the Jayhawk and the Dolphin, elicit squeals of delight from kids, who stop building sand castles to look. Occasionally a cutter will slink past beyond the breakers. Recreational fisherman might warily eye a passing Defender-class boat on the lookout for mischief. Semper Paratus.

It's comforting to know that, God forbid you ever get into trouble in the water, they're around to bail your ass out. Maybe it'll be one of those miserable looking kids that just ran by.

But the Coast Guard does so much the masses on the beach don't see.

The eleven core missions the coasties perform mean those recruits will function as cops, environmental advocates, educators, engineers, legal specialists, surveyors, intelligence analysts, man elite counter terrorist teams, and not to mention deploying to overseas alongside the Navy. Their calling is a multi-dimensional one, spanning the breadth and width of the U.S's defense and law enforcement establishments.

Now none of those young men and women are getting paid. Those waiting to join them are uncertain answering the call to service was the right move. And it's a goddamn disgrace.

A Coast Guard Recruit Color Guard marches in front of family and friends during Pass and Review during recruit graduation at Training Center Cape May, Aug. 2, 2013

Given the huge support for the armed forces in the United States compared to all other modern institutions, it's maddening that stories of coasties and their families turning to food pantries for help isn't moving the stones of Washington to action. That members of the administration either didn't know how the Coast Guard would be affected by shutdown or just didn't care is a national scandal in its own right, especially considering the Coast Guard is a central part of the nation's border enforcement — a role they're now fulfilling unpaid.

Good for Admiral Karl Schultz, the commandant of the Coast Guard, and his leadership team, for speaking out against the government shutdown. “You, as members of the armed forces, should not be expected to shoulder this burden,” Adm. Schultz said of the shutdown on Twitter. “Ultimately, I find it unacceptable that Coast Guard men and women have to rely on food pantries and donations to get through day to day life as service members.”

Secretary of Homeland Security Kirstjen Nielsen's conduct has shown she's a hopelessly ineffective advocate for Schultz and his sailors. While offering his resignation would not be appropriate, as such a drastic step should only be reserved for the gravest of moments, Adm. Schultz would be within his rights to advocate for his agency in public even more aggressively.

He can start by documenting everything the Coast Guard does. Daily. With embedded reporters and social media. He can do so respectfully, in the vein of his Twitter message.

Highlight the adverse conditions the Coast Guard operates in. Inland rescues. Celebrate each mission launched in support of each theatre command. Publicize every acre of marine wildlife preserved. Maritime laws enforced. Anything to drive home just how cynically our political leadership is treating a branch of the armed forces.

Most of all, Adm. Schultz needs to show us the recruits rumbling down Beach Avenue. Let each idealistic step knock the rust off of Washington's civic bones.