$1.4 billion in cocaine and marijuana, to be precise. 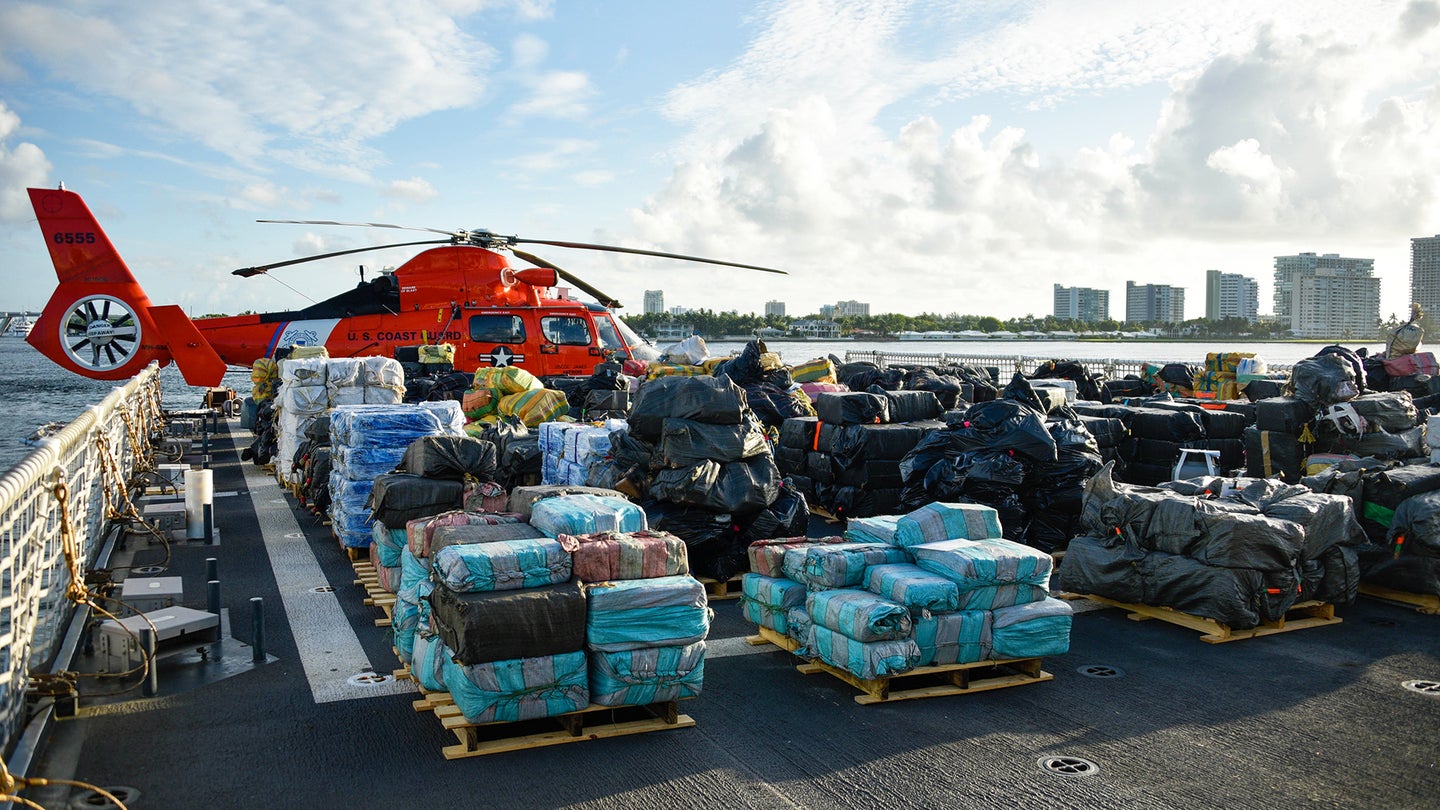 On Thursday, the crew of the Coast Guard Cutter James dropped off the haul of about 59,700 pounds of cocaine and 1,430 pounds of marijuana at Port Everglades in Fort Lauderdale, Florida, according to a press release touting the “largest illegal narcotic offload” in the history of the service.

The massive haul of nose candy and weed took up most of the helicopter landing pad of the 418-foot-long James after crew members stacked the bricks of drugs neatly for the obligatory photo opportunity:

The Charleston, South Carolina-homeported James kicked its seized cargo just one day after the service paid homage to its heritage of combating smuggling and enforcing tariffs beginning on August 4, 1790 as the Revenue Marine service. Nowadays, the service falls under the Department of Homeland Security and is charged with safeguarding America’s 95,000 miles of coastline as drug smugglers do their best to slip by undetected.

Despite the drugs being unloaded from the James, the seizures involved a total of five Coast Guard cutters, three U.S. Navy littoral combat ships, and a Canadian and Dutch vessel. All told, the team of vessels conducted more than two dozen interdictions against suspected drug smugglers in the Caribbean and off the coasts of Mexico, Central, and South America, according to the press release.

“Today’s offload is a result of our combined efforts of our inter-agency partners and a dedicated international coalition,” said Vice Adm. Steven Poulin, the commander of the Coast Guard Atlantic Area. “Together we will disrupt, defeat, and degrade transnational organized crime. We will strengthen our efforts and continue to build collaboration and capability.”

So how much is $1.4 billion in drugs, really? Well, if the Coast Guard could convert that seizure into cash, it’d have enough money to perhaps buy three more national security cutters just like the James at $482 million a piece. With a range of 12,000 miles and deployment endurance of two months, the cutters have seen plenty of work on the service’s law enforcement mission to thwart drugs and migrants from illegally entering U.S. shores.

The service seized about 145 metric tons (320,000 pounds) of cocaine worth $5.6 billion in 2020, according to its annual performance report. Aside from cutters like James, the service touted the use of armed helicopters and specialized pursuit boats as being crucial to stopping what it calls “high-speed go-fast” and “low profile vessels.”

While most of these stops on the high seas result in little fanfare, one particular seizure from June 2019 that was captured on video showed just how unpredictable and scary such operations can be. That month, the Cutter Munro out of Alameda, California was chasing after an alleged narco submarine in the Eastern Pacific when a Coastie leapt on board and banged on its hatch in a dramatic scene captured on video. The helmet camera footage ended with the narco sub crew opening the hatch with their hands in the air and the unnamed Coastie earning legendary status.