The future is here, and it’s a swarm of armed drones. 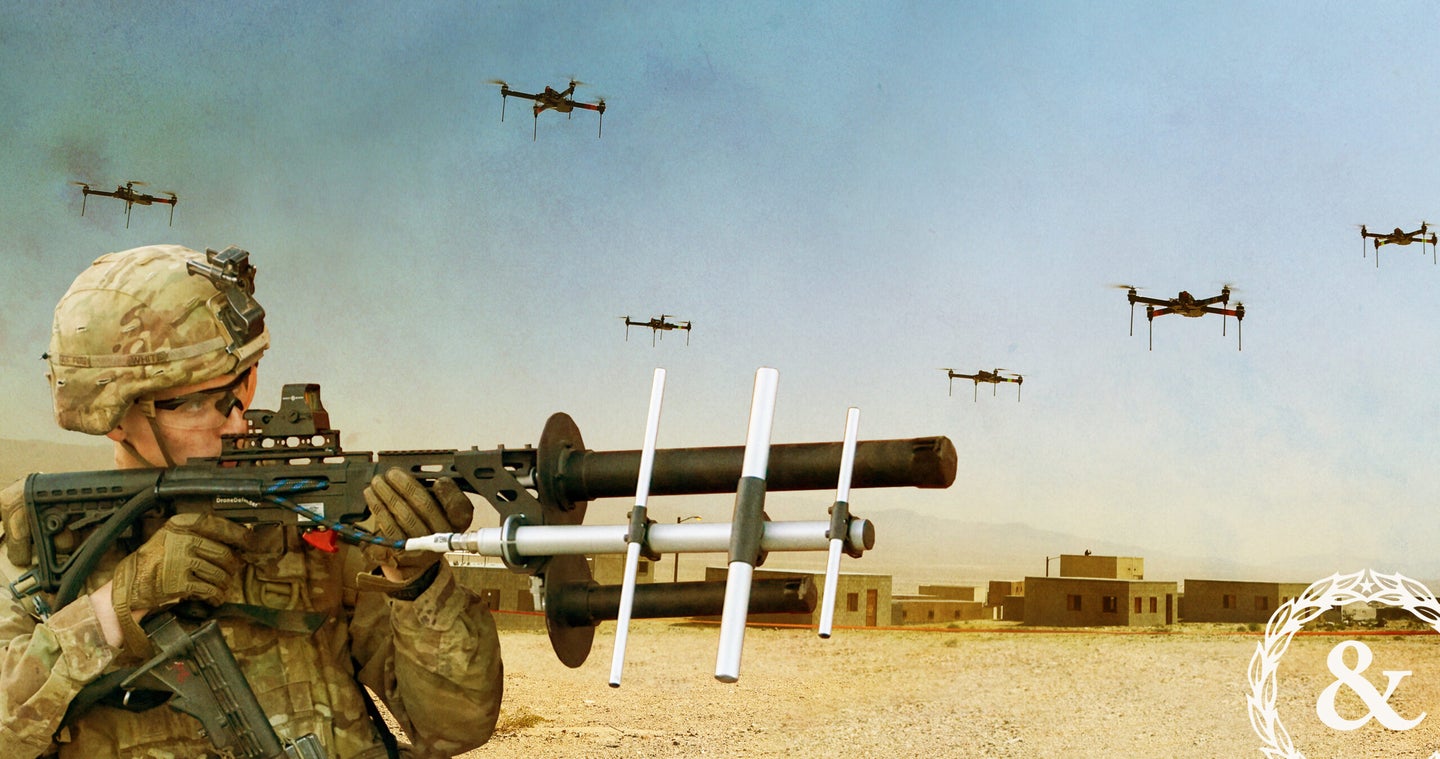 The future of Army training is here; and if you thought that a rotation through the National Training Center at Fort Irwin, California was tough before, it now involves fighting off a swarm of 40 armed drones.

Brig. Gen. Curtis T. Taylor, the training center’s commander, tweeted a video on Sept. 11 that shows a swarm of 40 quadcopter drones flying through the sky as part of a simulated attack by the 11th Armored Cavalry Regiment on a unit from the 1st Armored Division.

“At sunrise this morning a swarm of 40 quadcopters all equipped with cameras, MILES [multiple integrated laser engagement system], and lethal munition capable launched in advance of 11th ACR’s attack on a prepared defense by 1AD,” Taylor wrote on Twitter. “Drones will be as important in the first battle of the next war as artillery is today.”

The “MILES” gear Taylor is referencing is the system that simulates kills and casualties for personnel and equipment at National Training Center. The National Training Center is one of the Army’s principal training locations, offering more than 1,000 square miles where soldiers can prepare for deployments by training in a variety of combat scenarios, including a war against a near-peer adversary, such as China or Russia. The 11th Armored Cavalry Regiment, the host unit at the base, acts as the aggressor unit at the training center, simulating various adversaries.

“We’re working to integrate them into our battlefield simulation system, and we intend to use them,” said Brig. Gen. Taylor. “There is huge potential there.”

Taylor said that the training center is keeping a close eye on how drones are being employed in current conflicts, both in Ukraine and especially in Nagorno-Karabakh, where the use of small drones has proven critical for Azerbaijan in its conflict with Armenia.

“The mantra of NTC is to prepare formations to win the first battle of the next war, and what we’re looking at is: Are we properly portraying what the next war will look like?” said Taylor. “We believe that lethal drones will be a huge part of the next battle, and will represent an asymmetric advantage for mid-tier adversaries.”

The threat posed by enemy drones has come a long way since 2017, when the Islamic State group used cheap, commercially available drones to drop mortar rounds on Iraqi troops during the battle of Mosul in 2017. Since then, U.S. troops in both Iraq and Syria have been attacked by drones. Most of these incidents have been blamed on Iranian-backed militant groups.

And in September 2019, Iran used 18 drones as part of a swarm attack on Saudi oil processing facilities, prompting the U.S. military to send more troops to Saudi Arabia.

“Since World War II, U.S. troops haven’t had to look up,” said T.X. Hammes, a retired Marine Corps officer and senior research fellow at the National Defense University. “What we’re seeing now is a shift to an era of constant surveillance.”

The rapid proliferation of drone technology has forced the U.S. military to look for new countermeasures. Marines aboard the amphibious assault ship USS Boxer used their dune buggy jammer to down at least one Iranian drone in July 2019 while the ship was transiting the Strait of Hormuz, Military.com first revealed.

Since Russia launched its full-scale attack on Ukraine in late February, the Ukrainians have successfully used a variety of unmanned aircraft including Turkish-made Bayraktar TB2 drones to destroy Russian tanks, artillery pieces, ammunition dumps, and other targets.

“We think this is all a part of a trend towards a transparent battlefield, and future of warfare adversaries will be able to detect through commercial and national systems that extend through the depth of the battlespace,” said Taylor.

The United States has also provided Ukraine with Switchblade suicide drones, which are fired from tubes and can be maneuvered by an operator or fly autonomously to attack targets up to six miles away.

“What we’re now realizing at a tactical echelon is that if I have these fairly cheap drones, I can scale that up and provide precision firepower,” said Benjamin Jensen, a senior fellow at the Center for Strategic & International Studies. “In a tactical engagement that frees up aircraft and artillery systems to do other missions.”

While the war in Ukraine has increasingly shown the viability of these kinds of small drones, employing them as part of a combined arms strategy is still difficult.

According to Taylor, “what we’ve learned is that something like a drone swarm is still part of a combined arms fight.”

Taylor added that, “there are a lot of basic soldier skills that need to be readjusted. You have to spread out so you don’t present a concentrated target to the enemy. And you have to mask the elements that are most vital to your combat capability.”

When it comes to defensive measures against drones and drone swarms, Jensen said that “right now decoys and limiting the drone’s ability to see are your best bet. You could have something as simple as a cheap inflatable dummy to more advanced electromagnetic countermeasures.”

According to Peter Singer, strategist and senior fellow with the New America Foundation, “to fight against an unmanned swarm you can use electronic countermeasures to jam and overwhelm their systems and communications, kinetic responses to shoot them down using everything from SAMS to guided rounds to even other drones, or get ‘left of boom’ and go after the humans behind them.”

Given how rapidly drones are proliferating across the battlefield, soldiers should get used to training how to deal with attacks by swarms of small, armed drones in the sky.