As Iraq reels from recent violence, it’s worth remembering that 2,500 US troops are still there

Americans cannot forget that 2,500 of their sons and daughters are deployed to Iraq. 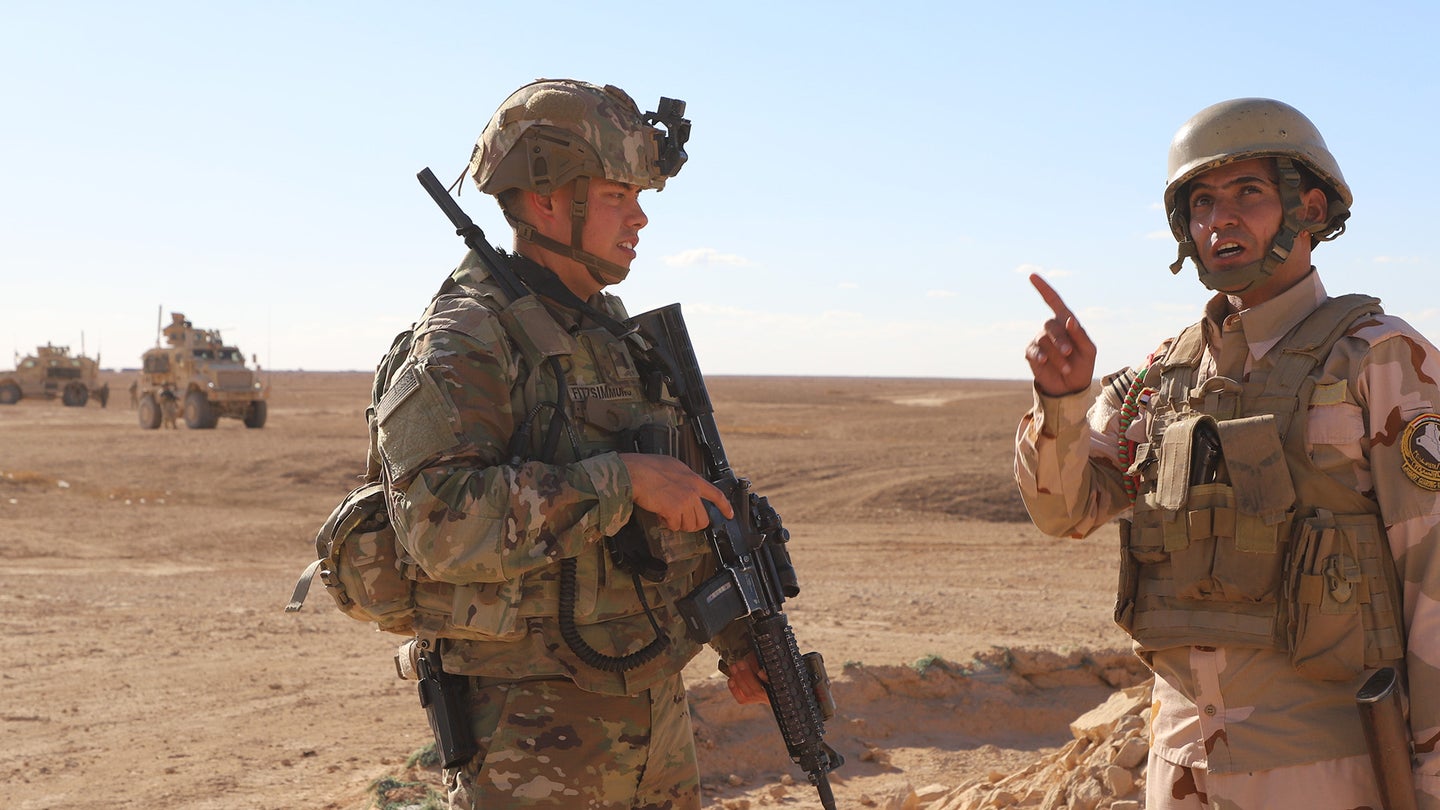 A U.S. soldier talks to an Iraqi soldier stationed at a perimeter outpost at Al Asad Air Base on Dec. 21 2021. (Maj. Alexa Carlo-Hickman/U.S. Army).
SHARE

Roughly 2,500 U.S. service members are currently in Iraq as the country’s political paralysis has erupted into the most serious outbreak of violence in years.

While the powerful Shiite cleric Muqtada al-Sadr has called on his followers to stand down and he has apologized for the fighting across the country that has left at least 30 people dead so far, his forces’ uprising underscores that U.S. troops deployed to Iraq are operating in an extremely volatile environment.

So far, no additional troops have been requested to increase security at the U.S. embassy in Baghdad, said Army Lt. Col. David Eastburn, a spokesman for U.S. Central Command.

On Dec. 31, 2019, thousands Iranian-backed militia fighters and their supporters breached the embassy’s front gates, but they stopped before entering the main compound. The U.S. military responded first by sending about 100 Marines from the Special Purpose Marine Air-Ground Task Force-Crisis Response-Central Command to Baghdad, followed by nearly 3,000 paratroopers from the 82nd Airborne Division’s 1st Brigade Combat Team.

The U.S. embassy in Baghdad has come under occasional rocket attacks since then, such as in January, when three rockets landed within the embassy’s perimeter.

A State Department spokesperson on Tuesday declined to say whether more troops would be dispatched to the U.S. embassy in Baghdad, adding that State Department officials frequently review the safety and security of its installations across the world.

Nearly 20 years since a U.S.-led invasion ousted former dictator Saddam Hussein, U.S. troops are still in Iraq to help prevent the resurgence of the Islamic State group, which arose from the ashes of Al Qaeda in Iraq after all U.S. troops left the country in December 2011. While the Islamic State no longer controls territory in Iraq, it has morphed into an insurgency there.

However, the most publicized U.S. military missions against ISIS have taken place in neighboring Syria, where another 900 American troops are deployed. Officials from President Joe Biden’s administration claimed in February that the head of ISIS killed himself and his family during a U.S. special operations forces raid in Syria. U.S. forces also captured an accused ISIS bomb maker in June during another operation in Syria.

While nominally focused on ISIS, U.S. troops in Iraq are also engaged in a proxy war against Iran, which backs militant-groups such as Kait’ib Hezbollah, which often fire rockets at U.S. troops in both Iraq and Syria, especially after the U.S. military launches airstrikes against these groups.

Saddam’s fall has helped to greatly increase Iran’s influence in Iraq, where most of the population is Shiite. The fact that Iran has so many of its tentacles in Iraq’s government and security forces can also put the U.S. military in an awkward position at times. For example, military officials reportedly had to delete a tweet showing that drones used in an Aug. 15 attack on American forces in Syria had been launched from a part of Iraq controlled by Kait’ib Hezbollah after the White House and Pentagon objected, David Cloud and Michael Gordon of the Wall Street Journal first reported on Tuesday.

U.S. troops in Iraq must also operate under the constant threat of an outright conflict with Iran breaking out. The United States and Iran nearly went to war following the Jan. 2, 2020 U.S. airstrike in Baghdad that killed Maj. Gen. Qasem Soleimani, then head of the Islamic Revolutionary Guards Corps, and Abu Mahdi al-Muhandis, who led Kait’ib Hezbollah at the time. Iran retaliated nearly four weeks later by firing ballistic missiles at Al-Asad Air Base. A total of 110 U.S. troops were diagnosed with mild Traumatic Brain Injuries after the attack.

It is unclear how the latest violence between militants loyal to Sadr, who is positioning himself as an Iraqi nationalist, and Iranian-backed forces in Iraq will affect the U.S. military’s efforts to prevent ISIS from regaining a foothold in Iraq, said Jennifer Cafarella, a national security expert with the Institute for Understanding War research institution in Washington, D.C.

“U.S. forces who are supporting Iraqi counterparts are achieving important effects by disrupting ISIS’s insurgency, but these effects merely buy time for improved political conditions that are unfortunately not on the horizon,” Cafarella told Task & Purpose. “Instead, the ongoing deterioration of security and governance driven by the power struggle between the Sadrists and Iran’s proxies places Iraq on a path to a worsening instability that the U.S. cannot contain at current force levels and which ISIS will be prepared to exploit.”