ISIS leader killed during US special operations raid in Syria 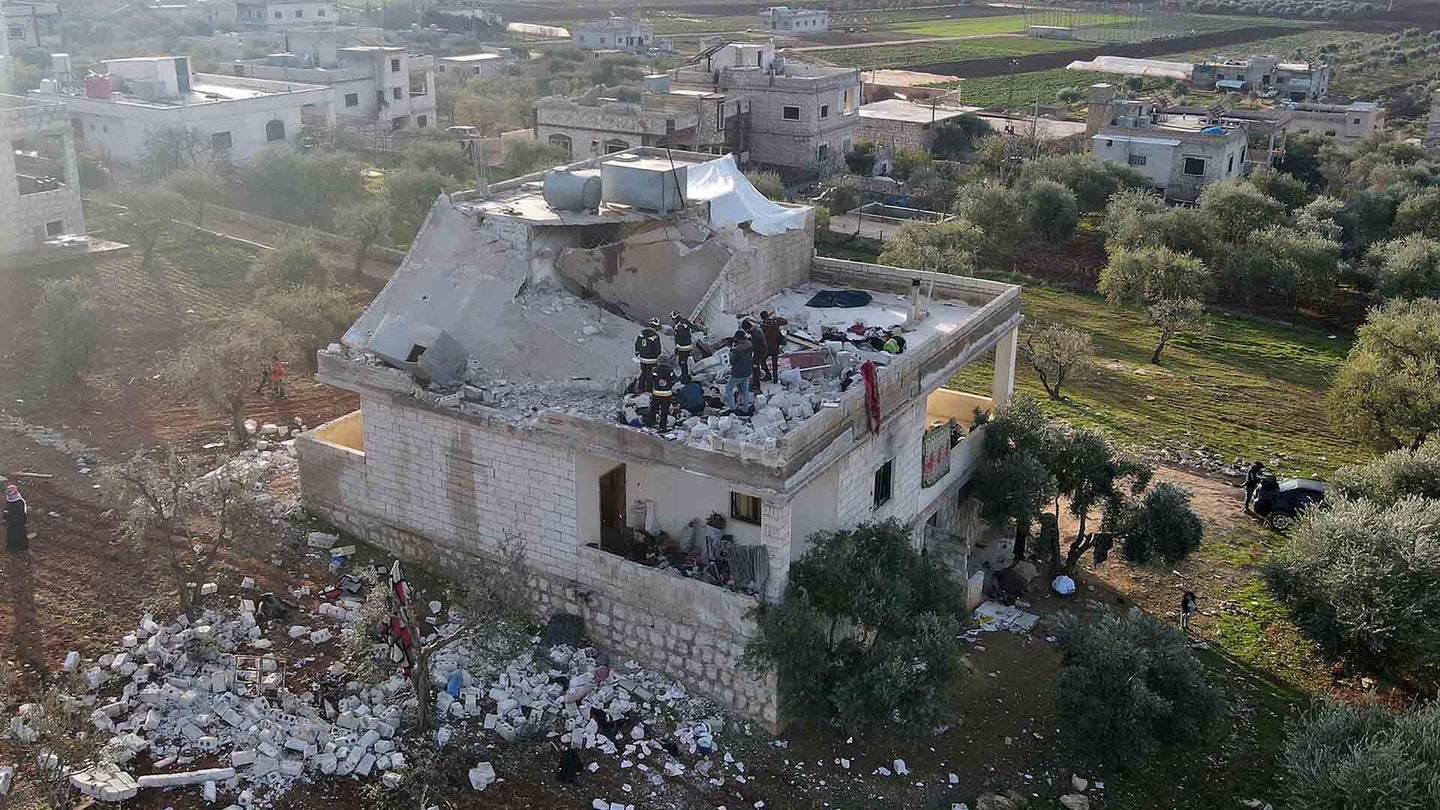 Feb. 3, 2022, at the scene of an overnight raid by US special operations forces against ISIS leadership in northwestern Syria (Photo by AAREF WATAD/AFP via Getty Images).
SHARE

The head of the Islamic State group killed himself along with his wife and children when he detonated an explosive device during an overnight raid by U.S. special operations forces in northwestern Syria, senior administration officials said on Thursday.

“The members of our military are the solid steel backbone of this nation,” Biden said from the White House on Thursday. “Last night’s operation took a major terrorist leader off the battlefield and sent a strong message to terrorists around the world: We will come after you and find you.”

Prior to Biden’s announcement, the Pentagon had issued a statement saying that U.S. special operations forces had carried out a “counterterrorism mission” in northwest Syria.

Local responders known as the “White Helmets” and the Britain-based Syrian Observatory for Human Rights told the Associated Press that 13 people were killed in the raid including several women and children. The exact numbers of civilian casualties were not immediately known.

Senior administration officials told reporters on Thursday that an unspecified number of civilians were killed when Al-Qurayshi set off an explosion while inside a residential building and when one of his lieutenants fought U.S. troops.

Reporters initially tweeted that Al-Qurashi exploded a suicide vest to kill himself and others, but Pentagon spokesman John Kirby was unable to say on Thursday what type of bomb Al-Qurashi may have used. Separately, Marine Gen. Kenneth McKenzie Jr, head of U.S. Central Command, said while speaking at the Middle East Institute that the device that Al-Qurashi is believed to have detonated created an explosion “which was more massive than would be expected from a suicide vest.”

Biden had directed the U.S. military to take every measure to minimize civilian casualties, so U.S forces launched the raid rather than an airstrike and American troops also told civilians inside the building where Al-Qurayshi was staying to leave, allowing several women and children on the building’s first floor to get to safety.

After the raid, a U.S. helicopter was forced to land due to mechanical issues and had to be de destroyed, said a senior administration official, who stressed that the aircraft was not shot down.

Separately, a U.S. aircraft killed at least two enemy fighters after being attacked by members of an Al Qaeda-affiliated group, the senior administration official said.

This is the second time in roughly two-and-a-half years that U.S. special operations forces have conducted a raid in Idlib province that resulted in the death of the leader of ISIS. In October 2019, between 50 and 70 U.S. troops that included members of 1st Special Forces Operational Detachment-Delta (SFOD-D) commonly known as Delta Force targeted Abu Bakr al-Baghdadi, who reportedly detonated a suicide vest, killing himself and three children.

The special operations forces team that carried out the Baghdadi raid included Conan, a military working dog that had taken part in about 50 missions. Conan, a four-year veteran of the SOCOM K-9 program, was injured during the mission but the dog recovered and later met then-President Donald Trump at a White House ceremony in November 2019.

While the U.S. military has successfully killed several senior leaders of terrorist organizations over the past 20 years, such victories have often proved to be fleeting. In June 2006, an American airstrike killed Abu Musab al-Zarqawi, the head of Al Qaeda in Iraq, but the group persevered and ultimately morphed into ISIS.

Navy SEALs also killed Al Qaeda founder Osama bin Laden in May 2011. The successful raid was an enormous boost for morale and brought some degree of closure for the Sept. 11 attacks nearly 10 years earlier, yet Al Qaeda did not die with bin Laden.