Given the Pentagon's access to spy satellites and reconnaissance aircraft, it is difficult to imagine why it has proven so hard for the military to locate a dog's junk. 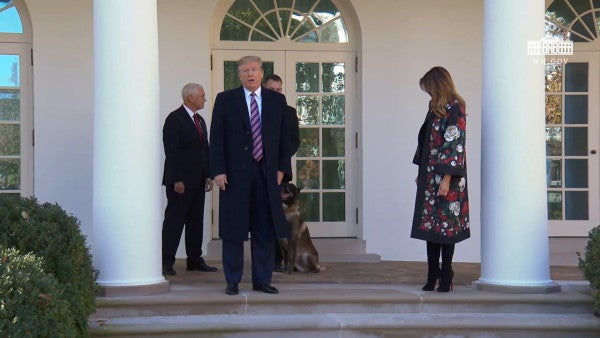 Just as the narrative surrounding the firing of former Navy Secretary Richard Spencer changes by the hour, the White House and the Pentagon cannot seem to agree on whether Conan, the hero military working dog from the raid that killed ISIS leader Abu al-Baghdadi, is male or female.

The confusion began in late October, when President Donald Trump tweeted a picture of Conan and the Pentagon refused to confirm the dog's gender. Amateur photo analysis led to speculation that Conan was female, but the head of Central Command appeared to establish Conan's manhood during an Oct. 30 briefing.

“He was injured by exposed live electrical cables in the tunnel after Baghdadi detonated his vest beneath the compound,” Marine Gen. Kenneth McKenzie Jr. said. “I will also note he has been returned to duty.”

However, some of Conan's supporters held out hope that the dog would turn out to be a momma dog. Those dreams appeared to come to fruition on Monday when a reporter covering a White House event with Conan wrote that an administration official confirmed Conan is the embodiment of girl power.

“Your pooler retracts the earlier comment that Conan was a very good boy,” Hunter Walker of Yahoo! News wrote in a White House pool report about the ceremony with Conan, Trump, and Vice President Mike Pence. “Conan is apparently a very good girl. Good girl Conan.”

An administration subsequently informed Task & Purpose that, yes, Conan was in fact a very good girl. Yet roughly 90 minutes later, Walker wrote a new pool report that Conan is a good boy after all.

“A White House official informed your pooler that Conan the dog is a male,” Walker wrote. “Multiple officials had previously said Conan was female. “Your pooler retracts prior statements calling Conan a 'good boy' and a 'good girl.' Conan is a good dog.”

That appeared to end the matter, until ABC News tweeted on Tuesday that Conan is – wait for it – really a girl despite what administration officials had claimed. This revelation came from an unnamed Defense Department official.

But Ken McGraw, a spokesman for U.S. Special Operations Command, assured Task & Purpose that the military had quadruple checked to make sure Conan has a penis. Minutes later, ABC News promptly tweeted that Conan is a guy.

Given the Pentagon's access to spy satellites and reconnaissance aircraft – and its penchant for drawing penises in the sky — it is difficult to imagine why it has proven so hard for the military to locate a dog's junk.

As of Tuesday, there were no questions about whether Conan is really a dog or a space alien.