UNSUNG HEROES: The 77 People On The Bin Laden Raid Who Are Staying Quiet

Every Thursday, Task & Purpose tells a story of heroism, usually from the 2.6 million veterans of Iraq and Afghanistan.... 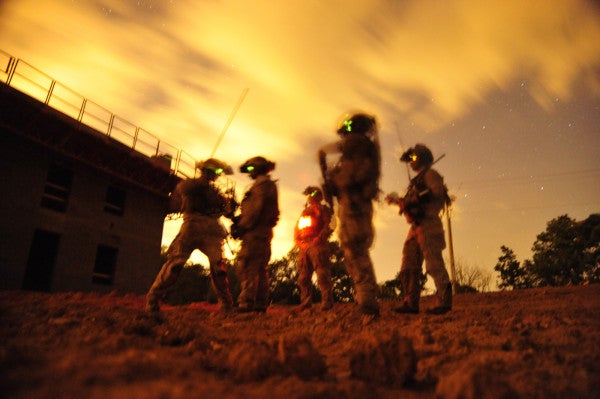 Every Thursday, Task & Purpose tells a story of heroism, usually from the 2.6 million veterans of Iraq and Afghanistan. In light of the recent publicity surrounding a couple of the several dozen men who were on the bin Laden raid, we’ve decided to recognize those who are doing the right thing and staying in the shadows.

Between the SEALs, the Army special ops pilots, the remain behind element in the Chinooks, and CIA assets, 79 Americans plus one really badass dog executed the raid that ended in bin Laden’s life. These men were 79 of thousands of men and women who worked tirelessly for a decade in the military, intelligence, and diplomatic communities.

America’s national security has been protected countless times by men and women who received no public recognition for their actions. Most are never known, some are represented by just a star on the walls of the CIA headquarters in Langley, Virginia. The point is that clandestine national security operations are a paramount, but by design, publicly thankless endeavor. The bin Laden raid should be no different.

But all America knows of the raid is the story of two men — Robert O’Neill and Matt Bissonnette aka Mark Owen. In coming forward, these men broke the trust and the tradition that guides clandestine military operations.

Task & Purpose previously detailed much of what’s wrong with O’Neill coming forward. The story of who shot bin Laden is far from definitive, and O’Neill’s seizure of the spotlight obscures two incredible stories of heroism on that raid — the unnamed helicopter pilot who avoided catastrophe in hard-landing the helicopter and the point man who killed bin Laden's 23-year-old son Khalid on the second floor and could have (maybe did) kill bin Laden himself, but opted to protect his teammates instead.

“You have this point man, one of the real heroes of this thing, keeping quiet, being humble, and setting a good example,” an unnamed source with deep ties to the SEAL community told Task & Purpose.

The command master chief and the rear admiral who head up Naval Special Warfare Command have made it clear that they’re not happy with O’Neill and Bissonette, that seeking publicity was not the right thing to do.

In an open letter to their entire command, the two SEAL commanders wrote, “A critical tenant of our ethos is ‘I do not advertise the nature of my work, nor seek recognition for my actions. Our ethos is a life-long commitment and obligation, both in and out of the service. Violators of our ethos are neither teammates in good standing, nor teammates who represent Naval Special Warfare.”

In coming forward, O’Neill and Bissonnette have done the SEALs a great disservice. They’ve created the perception that team members can’t be trusted with classified information, that there’s a chance they’ve created a whole new element of risk behind dispatching the Navy SEALs. The next time a high-risk, highly classified operation like this comes down the pipeline, the military and national security officials in the situation room might just send Delta Force.