The Gentleman’s Guide To Calling Out Stolen Valor

Editor’s Note: This article has been modified from its original version, which was published on the author’s public Facebook page.... 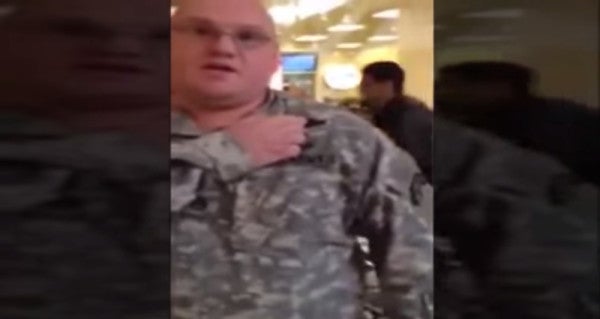 Editor’s Note: This article has been modified from its original version, which was published on the author’s public Facebook page.

The issue of stolen valor has once again reared its ugly head, this time in a Pennsylvania shopping mall where former soldier Ryan Berk confronted Sean Yetman, a man who was wearing Army combat utilities and sporting three stars on his Combat Infantry Badge, among other uniform discrepancies. Berk questions Yetman on various aspects of his uniform and the man fumbles through his explanations. When Berk asks why his flag patch is so low, Yetman replies simply, “You’ve got me on that one, bud.” At about the three minute mark the situation takes a turn. Berk, clearly agitated, becomes louder and uses some profanity as the man wanders off and claims that he has to meet his sergeant major. A woman who appears to be Berk’s companion is clearly uncomfortable.

This whole situation makes me a bit uneasy, and I’m not just talking about the part where as a Marine I find wearing fatigues in public to be cringeworthy. I appreciate that wearing a uniform by a civilian is protected speech because it goes to the heart of why I love the First Amendment: It exposes people and opens them up to ridicule. Without the protections afforded by the First Amendment, we might never know of such imposters. I applaud instances where my fellow veterans point out frauds. But the public often has the perception, incorrectly, that veterans are damaged. To many civilians, we are a group of potentially disturbed individuals who bear tremendous emotional scars and who should be handled with kid gloves because we could be a moment away from flying into a fit of homicidal lunacy. Becoming belligerent and loudly cursing at a person wearing a uniform inappropriately, in a crowded mall on Black Friday with children and families about, reinforces that perception. Most civilians simply do not understand why we would be that upset about someone wearing a uniform. Most civilians probably don’t even know that stolen valor is an issue at all.

Berk was later invited to be on Fox & Friends due to the popularity of his video, which now has over three million views on YouTube. In the replay of the video, the cursing was covered and no mention was made of it. Again, while I applaud Berk’s intent (and the intent of others who call out frauds), I fear that such an invitation will only encourage more veterans to act in such a way as was shown at the end of the original clip. I fear that it will escalate and reinforce the stereotype of the unhinged veteran. This is reflective of the social media age in which we live where any attention, positive or negative, is a good thing, and everyone is competing for likes and page views.

The veterans’ community has been overwhelmingly supportive of the efforts of Berk and others regardless of the amount of profanity used or aggression showed. There is even a Facebook page dedicated to stolen valor, as perhaps there should be. But I’ve seen painfully few instances in which another veteran has pointed out that such behavior is not necessary to the overall goal of calling out frauds. On the contrary, I’ve seen numerous examples of veterans stating that they would feel compelled to risk arrest and inflict bodily injury on this man or others who they see incorrectly wearing a uniform. The aforementioned stolen valor page even has an edited picture, submitted by a commenter, of Yetman. It shows another man standing behind him with a gun pointed at his head.

These sentiments should be cause for concern. The fact that a not-insignificant number of my fellow veterans somehow feel entitled to use force against a civilian, or would even condone such, is deeply troubling. Seeing a person wear a uniform that he didn’t earn, and who is disrespecting the memories of those killed or wounded while wearing the uniform, is distressing and upsetting. We are well within our rights to point this out to those who may easily be duped by a phony.

If, in our travels, we come across civilians who appear to be inappropriately wearing and benefiting from our uniforms, we might simply pull them aside and advise them that wearing these uniforms in the hopes of material gain is against the law, a fact about which they might be unaware. They might also be unaware that some veterans find such displays in bad taste and very disrespectful. A situation such as this can be a powerful learning experience and a positive interaction between our community and those who haven’t served. Further, it is usually very easy to ascertain whether or not a person is actually a veteran. If such a person lies about it and shows no contrition, it is certainly acceptable to engage in public shaming because, as Sean Yetman discovered (he has since deleted his own Facebook page and disconnected his telephone number), public shaming is a very persuasive tool to curb bad behaviors. But I implore my fellow veterans to approach these situations with a little more decorum and tact, to keep your bearing, and avoid bringing discredit upon yourselves or your service or, perhaps worse, to contribute to dangerous stereotypes.