The Ex-Military Buddies All Veterans Have

The military is less of a melting pot and more of an awkward stew with liberals thrown in among conservatives,... 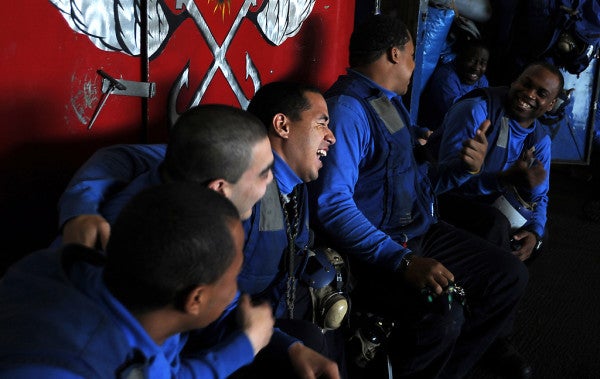 The military is less of a melting pot and more of an awkward stew with liberals thrown in among conservatives, conformists, and the occasional hippie stoner. That sort of diversity doesn’t just vanish once you leave active duty.

Just as you changed after leaving the military, the friends you made while you were in have likely gone through the same transformation, and sometimes it’s a bit shocking.

Here are the five military buddies that all veterans have, or have had, at one point or another.

1. The one who waits to leave the military to get in shape.

Back when you guys were roommates, the farthest distance you ever saw him walk was the seven feet from his sweat-stained La-Z-Boy to the fridge so he could grab another beer and a slice of three-day-old pizza.

Now he’s doing Tough Mudder every week, uploading daily sepia-toned gym selfies to instagram, and announcing to his friends when his posts are the top hit on #bodybuilding. You can’t decide what’s more impressive: his sudden transformation from fat body to body builder or that his gym selfies always have perfect composition and use the rule of thirds.

2. The guy who suddenly gets all sophisticated.

The last time you saw each other in the military, he was passed out on the floor with an empty handle of Sailor Jerry’s rum next to his head, and partially choking on a full horseshoe of Grizzly Wintergreen Long Cut snuff.

3. The guy who’s still pretty much in, except now he has a beard.

He’s been out for three years, but still ends every sentence with Hooah, ‘Rah, or Kill. He goes to school or work with his service-issued backpack and unit patches, waiting for someone to ask, “Were you in the military?” The only noticeable change is that now he sports a meticulously well-manicured beard or goatee.

Sometimes you wonder if the only reason he left active duty was because of the regulations and restrictions on facial hair, piercings, and tattoos — he has full sleeves.

4. The guy who gets accused of stolen valor when he says he was in the military.

When you troll his Facebook page, there’s no difference between the profile picture he has now and the one he had a year before he enlisted.

Between the hemp sweater and the faint aroma of patchouli and weed, he’s been accused of stolen valor so many times that he carries around a copy of his DD-214. Recently, he’s taken to telling old high school friends that he’s been on vacation for the last four or five years.

Kind of makes you wonder if there’s such a thing as transitioning too well.

Not only is she a veteran, but she’s been downrange a few times as well, which makes most of the skinny-jean wearing hipsters she dates feel pretty self-conscious.

Whenever you ask how her dating life is, she launches into an angry rant about male insecurity, and with good reason. It’s not her fault that she has bigger biceps than the guy she’s with. Though to be fair, when you’re having an argument with your boyfriend, handing him a tampon and asking if it’s his time of the month isn’t going to de-escalate the situation. That goes over well enough with fellow vets, less so with civilians.