UNSUNG HEROES: This Combat Controller Has Become One of the Most Decorated Airmen Ever 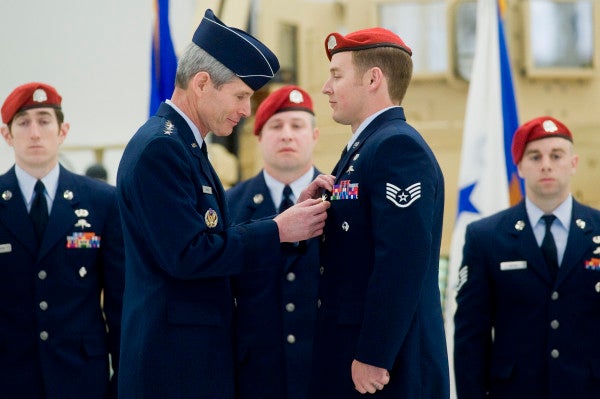 While deployed with the 22nd Special Tactics Squadron, Harvell was embedded with a Army Special Forces element conducting operations in Helmand province. On two separate missions in May 2007 near Kajaki, Afghanistan, Harvell directed close-air support at great personal risk, according to military citations and media reports.

On May 8, during a reconnaissance patrol, Harvell’s team was ambushed in their nine-vehicle convoy. In the course of the ten-hour engagement, Harvell directed numerous airstrikes, including strafing runs a scant 45 feet from his position.

In a separate ambush on May 30, during an operation to recover a downed CH-47 Chinook aircrew, Harvell was wounded and knocked unconscious by RPG fire. Upon waking up, a still bleeding Harvell simultaneously engaged multiple Taliban militants with his personal weapons and called in danger-close ordnance from the air.

Harvell’s actions on both days in May eliminated a total of 212 enemy fighters, and saved the lives of his fellow special operators. As a result, Harvell was awarded the Silver Star.

But it wouldn’t be his last.

Barely two months after the firefights that resulted in his first award, Harvell again demonstrated his skill and excellence as a combat controller. On July 25, again operating with a Army Special Forces element in Helmand, this time near Nowzad, Harvell and the team he was supporting breached a compound in order to flank an enemy ambush.

Harvell engaged multiple Taliban fighters without regard for his personal safety. When enemy reinforcements arrived, Harvell stopped in the middle of a 200-yard dash across an open wadi to cover the rest of the team’s withdrawal.

Once he was safely across, he then called in fire from A-10 Warthog and AC-130 Spectre aircraft, which eliminated over 50 enemy combatants and ended the engagement.

According to Air Force Times, with these actions earning him a second Silver Star, Harvell is one of only seven service members, and three airmen, to receive two Silver Stars since 9/11.