UNSUNG HEROES: The Soldier Who Destroyed An Enemy Mortar Position With A Jammed M-16

The March 23, 2003, ambush of 507th Maintenance Company in Nasiriyah, Iraq, was both a military and public relations disaster.... 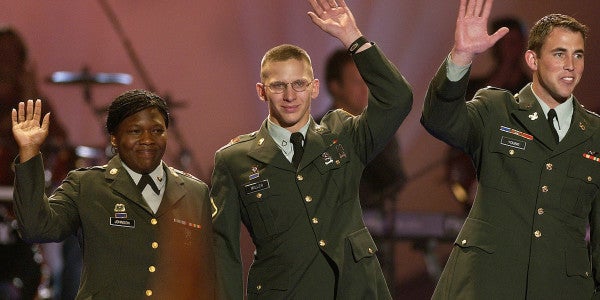 The March 23, 2003, ambush of 507th Maintenance Company in Nasiriyah, Iraq, was both a military and public relations disaster. Of 31 soldiers who made a wrong turn into the city during the chaos of the invasion, accompanied by two soldiers belonging to the Army’s 3rd Forward Support Battalion, 11 were killed, seven captured, and nine wounded, according to the U.S. Army’s official report of the ambush. Pfc. Jessica Lynch, initially hailed as a hero by the Bush administration and the news media, testified before Congress that she lost consciousness early in the attack and never actually fired a shot.

The real hero of the ambush fought back as long as he could with a jammed gun and no support. Even after his capture, he prevented the enemy from obtaining sensitive papers that would have jeopardized more American lives, according to an account by Tom Bowman of the Baltimore Sun.

When the American convoy made its fateful navigational error, 23-year-old Army welder Pfc. Patrick Miller was driving a five-ton wrecker truck with Sgt. James Riley in the passenger seat.

Soon after the ambush began, Miller pulled alongside a disabled tractor trailer to help rescue marooned occupant Pfc. Brandon Sloan. Miller “executed a combat pick-up of Sloan while moving and under fire,” reads a portion of the Army’s official investigative report on the ambush. Sloan’s passenger, Sgt. Donald Walters, was already missing and later determined to have been killed in action under unknown circumstances.

Ducking low over the dashboard, Miller pushed his truck forward as bullets impacted it from all sides. One bullet shattered Miller’s sideview mirror as he tried to adjust it, then another struck Sloan in the forehead, killing him instantly.

Miller pressed his vehicle forward for as long as he could. Scanning his surroundings, he was afforded terrifying views of RPG-toting Iraqis setting up mortars, and more with AK-47s arriving to the ambush site in white taxis.

Finally, his bullet-riddled truck, with a damaged transmission, came to a stop just across a bridge spanning the Euphrates River. Miller and Riley disembarked and ran ahead to another bloody scene: A tractor-trailer had veered off the road, and a Humvee crammed with five more soldiers had rear-ended the bigger truck at high speed.

Miller and Riley took one look at the heap of twisted metal and bodies and thought all the Humvee’s occupants, including Lynch, were dead. The pair moved on to help their two wounded comrades inside the cab of the tractor-trailer.

Riley gathered his surviving subordinates and search unsuccessfully for an M-16 rifle that wasn’t jammed. The Army’s investigative report of the battle blamed the jammed weapons on dusty conditions and poor maintenance.

But instead of taking cover with the others, Miller ran through a gauntlet of fire toward an Iraqi dump truck, hoping to capture it and drive his fellow soldiers to safety. Along the way, Miller spotted a group of Iraqis 50 feet away from him setting up a mortar tube. His assault rifle was partially jammed as well. He realized he could fire one round at a time by continuously slapping his palm into a lever on the side of the weapon that slid each round into place.

Taking cover behind a berm, Miller used this painful technique to shoot seven Iraqis one by one, as they attempted to launch mortars at his trapped comrades. Riley witnessed Miller repeatedly pop up from behind cover to fire at the Iraqi position, making each enemy pay with his life for trying to drop a mortar round into the tube. Spc. Edgar Hernandez also recalled Miller’s lone charge, hearing his single shots stand out against the bursts of the Iraqi fire.

Unlike Miller, the Iraqis’ fully functioning weapons always missed. “The only thing I was thinking was if they don't get a mortar loaded, they can't blow them up,” said Miller, whose palm was bruised from manually forcing each bullet into position before firing.

When the mortar position had fallen silent, Miller caught sight of an armed man using two women as a shield. He shot the combatant and sent the two women running away.

“PFC Miller moved beyond the crash site, engaged the enemy, and was captured after being surrounded,” states the Army’s official report. “Although unconfirmed, Miller may have killed as many as nine Iraqi combatants.”

But moments later, more than two dozen armed Iraqis in civilian clothes overwhelmed Miller, who dropped his M-16 and put up his hands.

After his captors roughed him up and argued about whether or not to kill him, they delivered Miller to uniformed Iraqi military officers, who found a slip of paper in his helmet containing his battalion’s secret radio frequencies for medical evacuations and other emergencies.

Thinking fast, Miller told his captors they were prices for power steering pumps. He watched as the officers threw the valuable piece of paper into a fire.

In a reversal of roles, Miller tortured his captors during his three weeks as a prisoner of war — by singing Toby Keith’s patriotic country song “Courtesy of the Red, White, and Blue” until even his fellow prisoners couldn’t stand it. The guards shouted for him to shut up everytime he sang, which was often. “He sang it all the time,” fellow prisoner of war, Spc. Shoshana Johnson, told The Baltimore Sun.

The Army believes Miller killed as many as nine enemy fighters to protect his trapped, wounded, and outgunned comrades. But after his deployment, Miller focused his memory on nine entirely different men and women, by erecting a framed photo in his living room with portraits of the nine members of his company killed in the ambush.

For his actions, Miller was the only member of his unit to receive the Silver Star.

He's one of my heroes,” Spc. Johnson told The Baltimore Sun. “His actions may have saved my life.”