Few things in this world are more beautiful than a sky full of U.S. Army paratroopers descending from a fleet... 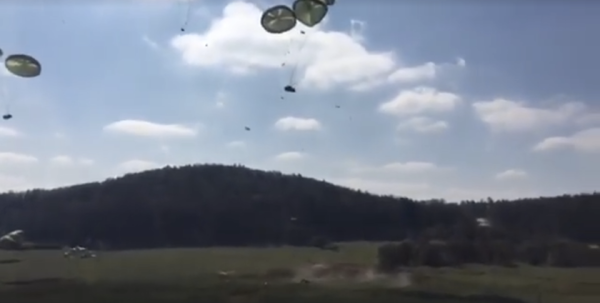 Few things in this world are more beautiful than a sky full of U.S. Army paratroopers descending from a fleet of C-130s on a perfect spring day. The planes glide by, the chutes pop open, and the troopers float down to Earth like dandelions in the breeze.

And so it was several days ago as the Army’s storied 173rd Airborne Brigade was performing a daytime jump over the grassy fields of Hohenfels, Germany. But then things took an unexpected turn. Someone had failed to properly secure the parachutes on the Humvees.

Fortunately, someone filmed it.

The video, which first appeared on the U.S. Army W.T.F! Moments Facebook page, will likely be featured in military PowerPoint presentations from now until eternity as an example of why attention to detail is key. In it, we see three — three! — Humvees plunge from the sky and explode upon impact. It’s amazing.