Army Engineer Receives Helmet That Saved His Life In Combat 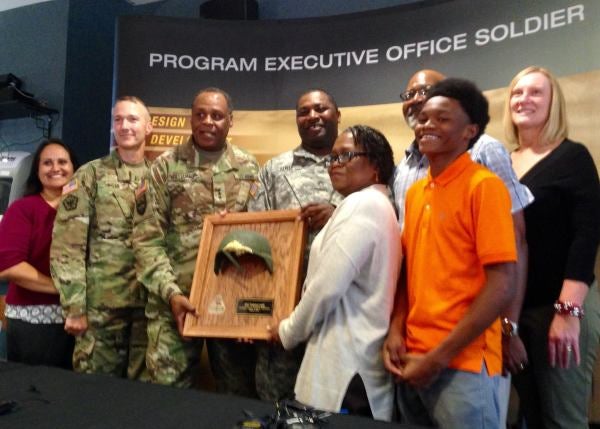 Soldiers from the 41st Engineer Company had just passed through a village in eastern Afghanistan when the shooting started.

The Oct. 4, 2012, route-clearance patrol in Regional Command East was on foot and taking heavy enemy fire from an area of thick vegetation.

“Within the first couple of bursts, one of them sort of found me and knocked me off the side of the road,” he recalled.

Lewis didn't realize it at the time, but the enemy rifle round struck him on the right side of the helmet, traveled around and blew out the front of the headpiece.

“I just had a ringing in my ears and a slight headache,” he said. “It was like a flash bang or something where it just hit you without you even knowing it's there. It just knocked me over.”

Lewis said he didn't see the helmet until he got back to base and was in a medical facility.

“Once they told me I took a round to the ACH, my first thing was I want to see it,” he said. “I looked at it and I was like OK, the inside of it the right side of it where I took the round was all puffed out, so that is when I started saying 'it actually works.' “

Three and a half years later, Lewis received the helmet that saved his life at an April 19 ceremony hosted by Program Executive Office Soldier at Fort Belvoir, Virginia.

The front half of the helmet is now mounted on a special, wooden plaque. PEO Soldier, the command that's responsible for soldier equipment, including protective gear, routinely makes these presentations, returning body armor or helmets that have saved soldiers' lives.

“Really, what I have seen after doing a couple of these is its closure. It's healing for that soldier to be able to see that one piece of equipment that literally saved his life,” said Col. Dean Hoffman VI, project manager for soldier protection and individual equipment.

Hoffman spoke about the next generation combat helmet — the Integrated Head Protection System — which will give the soldier the ability to attach extra armor to the top of the piece to provide additional protection against snipers shooting down on soldiers riding in an open turret.

The system will also include an armored facemask to protect against gunfire and shrapnel. It is currently going through initial lot acceptance testing and factory acceptance testing. Once that is complete, the Army plans to begin purchasing them sometime in 2017, Hoffman said.

Capt. Alexander Dillon, who was Lewis' platoon leader the day he was shot, was at the ceremony.

He recalled seeing him after the gunfight.

“Staff Sgt. Lewis was sitting there, he had his Kevlar off, a little bit of blood on his forehead and he was looking at me, and I was very happy to see him looking at me,” he said. “He didn't act like anything happened at all.”

Lewis, who has done four combat deployments in his 19 years and five months in the Army, admitted that equipment is one of the things he has complained about in the past.

“Being a soldier, we complain about a lot of stuff; this gear was one of my main things when we deployed,” he said. “I don't complain about it anymore. I am a walking testament.”