Editor’s Note: This article by Richard Sisk originally appeared on Military.com, the premier source of information for the military and veteran community. The... 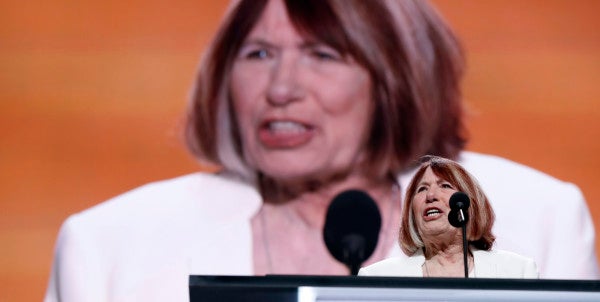 The mother of one of the Americans killed in the 2012 attack on the U.S. compound in Benghazi said she blamed the presumptive Democratic nominee Hillary Clinton for the tragedy.

Patricia Smith, the mother of Sean Smith, the U.S. foreign service information management officer who was among four Americans killed in the attacks, including Ambassador J. Christopher Stevens, spoke Monday at the Republican National Convention in Cleveland.

“I blame Hillary Clinton personally,” she said. “She lied to me and then called me a liar,” she added amid loud boos from the crowd.

Clinton has defended her response to the incident.

“You know, look, I feel a great deal of sympathy for the families of the four brave Americans that we lost at Benghazi. And I certainly can’t even imagine the grief that she has for losing her son,” Clinton said during a debate in March, referring to Smith. “But she’s wrong. She’s absolutely wrong.”

The convention that will endorse Donald Trump as the party's presidential nominee opened Monday on a “Make America Safe Again” theme labeling President Barack Obama and Hillary Clinton as weak on national security at home and abroad.

The message from numerous speakers repeatedly cited the September 2012 attacks on Benghazi that killed Ambassador J. Christopher Stevens and three other Americans, but was deliberately short on the specifics of what Trump as commander-in-chief would do to change course.

Trump campaign manager Paul Manafort said Sunday that the convention would avoid specifics while helping the public “better understand the breadth” of Trump and pointing out “'the failed policies of the Obama and Clinton administration.'”

The preview from the Republican National Committee set the tone for Monday: “From attacks on our own soil and overseas to the tragedy in Benghazi, the policies of Barack Obama and Hillary Clinton have left us vulnerable.

“Our immigration system is broken, leaving our country open to security threats and the negative consequences of illegal immigration. A Donald Trump administration will listen to and learn from our nation's heroes who have put themselves in harm's way and pursue a national security strategy and foreign policy that will strengthen our military and make America safe again,” the RNC statement said.

In addition to Smith, speakers on the first day included Marine Corps veterans John Tiegen and Mark Geist, who were security contractors involved in the fight at a CIA annex about a mile from the Benghazi consulate.

Geist and Tiegen were depicted in the film “13 Hours: The Secret Soldiers of Benghazi,” directed by Michael Bay. Geist and Tiegen maintain that they and other security contractors were given an order to “stand down” by a CIA officer when they sought to come to the rescue in Benghazi. The CIA officer later told The Washington Post that a stand down order never was given.

In the afternoon session, Republican Sens. John Barasso of and Pat Roberts of Kansas pressed the message.

“The men and women of America's military remain the world's best,” Barasso said, but “they have been shortchanged in numbers, equipment and benefits” by Obama.

Roberts, a Marine Corps veteran who described himself as the “senior Marine in Congress, said that Hillary Clinton and the Democrats “have made our world and our country less safe.” He added that Clinton “failed to protect American lives in Benghazi.”